Why Music is Important 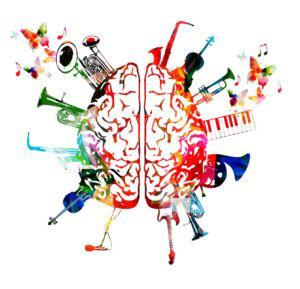 After reading grown adults trying to use social issues to defend the malady of the music industry and falling for publicity stunts seeking to bolster the brand of their newest shiny cog in the wheel, I figured it's time to look at why music matters. Much like the rest of the universe music is made of vibrational frequencies, The two most basic ways soundwaves affect the brain are in low frequency theta and delta states that cause relaxation and help sleep. Then there are higher frequency waves tied to the gamma state that stimulate and energize brain function. Volume and rhythm can boost adrenaline or lower noradrenaline, so it influences us on cellular level.

This is why movies use music to create something with more emotional impact. This is why religious ceremonies use it before their services (rituals) to make the congregants more receptive. Though this practice was handed down by ritual magicians before them. Music is magic, but for the muggles reading this think of magic as science the general public does not understand yet, just because you do not understand it does not mean you should not respect its power.

Since the early days of the music business, it was seen as a threat to the ruling government when it influenced young people. After all, young people out of control are not the best consumers. But there was money to be made from popular music, so they began prefabricating artists who projected the images and messages the industry felt was edgy enough for kids to like, but still controlled. The Beatles broke from this mold and abandoned their suits. With the suits gone, they explored eastern religion and took drugs. An entire generation followed suit, sure there were already beat poets in the jazz clubs doing this, but they did not have the pulls of the Beatles.

At the time Don Kirshner has used what was being called “Brill Sound” to pump out prefabricated pop by using a stable of songwriters who punched the clock to do this that included Neil Diamond, Paul Simon, Carol King, and Neil Sadaka among others, Don also worked with Bobby Darrin to work this into commercials and create an even more infectious style of pop they called “Bubble Gum”. Much like the candy it was sugary, so also addictive and has zero Nutrional value. This carried on in different forms into the pop music of today, Bubble gum or candy is not going to ruin your heatlh in moderation, if it is the sole source of nutrition, that is not sustainable for your body, just like in its sonic form it programs your mind to do less thinking. If you are looking for proof here, just ask yourself do you see more young kids reading books or listening to 30 second bursts of pop music on Tik Tok.

An interesting side note to Kirshner is he also worked with the television producers who brought us the Monkees , four actors who were also marginal musicians to portray a fictional band that they gave life while Neil Diamond punched a clock and wrote songs geared to appeal to fans of the Beatles, but with none of the touchy lyrics that questioned the state of the world. They never did drugs on screen, the Monkees were geared to dumb down and make fun of hippie culture. They were also the blueprint followed to create the Spice Girls, Backstreet Boys, NSYNC, and even Linkin Parks, who later the pop music of 2022 is influenced by. Today knowing their Emperor wears no clothes, they have begun to build a critical armor for the empty calorie clowns using other forms of media to create brands championing the narratives / issues their audience should relate to including the audience's sense of self including gender, race, sexuality and body image.

By asking why you are filling your brain with vapid vibrations rolled off an assembly line, is to defile the sacred cow. This is not about music it is about whatever issue the fan base is choosing to associate with this artist. After all the music was the Trojan Horse for controlling a demographic in the first place, but since minds have already been dumbed down the attention span numbing effects of bubble gum that has not been promoting higher brain function by design. Thinkers are dangerous, just like readers, who might consume information thus turning them into thinkers as well, all big trouble, since one thought about the music you are consuming could turn into the food you are consuming, which in turn might lead to questioning the machine as a whole.

Wait, are you saying pop music turns you into an idiot who questions nothing? No that can be accomplished through all forms of music or entertainment. But what you load into your brain matters. I listen to pop music at times, I also eat junk food when I am depressed. Junk food makes my depression worse, not better. It is ineffective because I seek to further my health. When people say why can’t you let someone enjoy garbage music. Listen to what you want but do it with intention. I am an informed consumer who knows there is no substance, but it is going to shift my vibration much like candy shifted me as a child, and what the artist’s brand stands for is an elaborate ruse created by an assembly line that wants less thinking and more consuming. Is that also the lesson you want to reach your children?

In order to create magic in our lives or make the most of science we do not understand yet, we have to be clear in our intention, since focused intent is the essence of magic, anything else is ineffective on a mental, physical, and spiritual level. Or we can stick bubble gum in our ears, eyes, mouth and nose and go back to sleep, since all of that is too much to wrap our heads around.