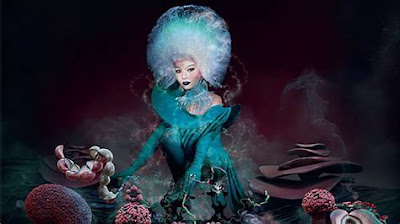 There was a time when I was a huge Bjork fan. However, her 2004 album was the last I really dug. To her credit she is already miles ahead of most of today's music, just due to the fact she only has one co-writer on three of the 13 songs. Her writing is very subtle as it takes a couple listens for the opening track to grow on me. She still retains a surreal quality to her sound as the minimal approach to her arrangements owes more to jazz, run through a glitchy filter of electronics. The lyrics to "Ovule' would not be out of place at a self-help seminar. "Mycelia" is like an instrumental interlude, but it is created with vocalizations. "Sorrowful Soil" is the first song where the inspiration of her mother's death feels apparent. It is layered vocals creating a swirling harmony. You might compare this to Imogen Heap, but Bjork was doing this before her.

Her choice of melodies challenges listener used to pop music, in many ways a song like "Ancestress" is more like musical theater. Lyrically in contemplates her relationship with her mother. The beat does not come in until much later in the song, as it flows off the angular vocal. "Fagurt" is more of an interlude, but "Victimhood" is an interesting song.  She goes against the grain when it comes to what the narrative is for women these days. It makes sense, after all at 56 she is older and wiser. I should not be surprised to find "Allow" reminding me of a Icelandic fairy song, as it drifts without much to anchor it. Her ode to mushrooms, which inspired her new albums, leans more toward her Broadway side, but on mushrooms.

"Freefall" is an interesting song that takes he kind of odd turn that for Bjork is pretty typical, if there is a typical for her. The title track that is also about mushrooms, takes an even more obtuse and jarring turn. But it is so weird I dig it. Then the album closes with mom, maybe mushrooms have helped her work through the grief, those are the two modes of this album. She closes the album with the most delicate moment yet. I will give this a 9.5, as she succeeded in capturing her vision, most of this album has to grow on me but even at its most languid it is still close to perfect 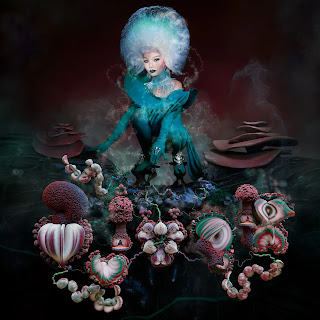