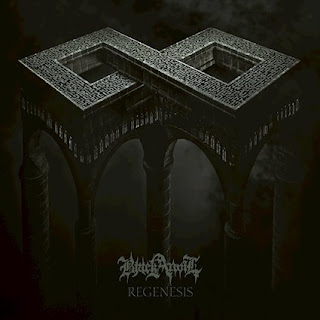 New York's blackened trio is back. They charge out of the gates with a great deal of power, and even midway into the opening track, take a moment to simmer. This is a bigger and more produced album, than previous releases, though it does not compromise on the heaviness. In the scope of sound, it approaches the sort of dark metal Behemoth makes. Sometimes more feral. At other times the songwriting is sharpened even keener on a song like "8 Bit-Terror'. Unlike Behemoth they are more convincing when it comes time to thrive off blast beats and a black metal sound. However, when the lean too far into the expectations of what black metal should be they can fall into sounding like all the other black metal bands. They do not allow themselves to stay stuck in that place for long, with a keen sense for eerie guitar melodies.
They show their strength as songwriters when they allow themselves to give into darker leanings, which are more deliberate and melodic. Not to say it is not possible to sound dark when playing your standard black metal, I think we are at a point where that has lost a great deal of the danger since we have heard it done so many times.  They split the difference on "Castrum Doloris" , though tend to go in a more standard black metal direction more often than not. You can hear how touring with European black metal bands influenced their sound over the years. They sound way more legit as a black metal band than their more hipster peers. I like how they layer the sung vocals under the snarled ones on "Echoes Tapestry".
They marginally step away from this with the more melodic "NYC Nightmares". "Grant Us His Love" splits the difference between a more feral thrashing attacking and some grandiose melodic dynamics. There isa seamless flow into the title track that closes the album, it does have melodic moments and they do not let savagery alone rule the day, by showing a commitment to song writing.  I will give this a 9.5, the best black metal coming out of America these days for sure, and proof that melody with hooks has a place in the genre.This drops November 4th on Season of Mist
Posted by Wilcifer at 8:53 AM