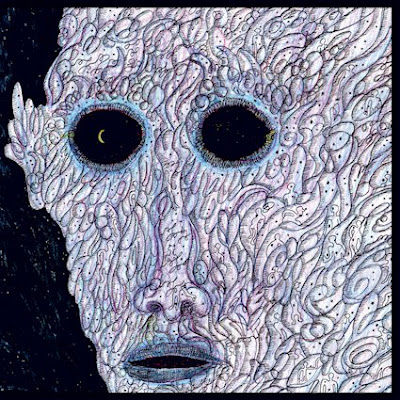 I like the dark throb that opens the newest album by this Swedish band. Colored by the kinds of clouds that might hang over a doom album, sultry vocals shroud the emotive narrative of the song as the guitar builds layers of sonic tension. The vocals weave hypnotic chants rather than concern themselves with hooks, but on the first song it does still draw you in all the same. Can they keep my attention for the rest of the album remains to be seen. They switch things up into more of a witchy groove on the second song. Here it has more of a doomy lingering. More of... not saying they are fully committed to hanging in the graveyard. It is equal parts grunge aside from the vocals, as the guitar reminds me of Alice in Chains "Would?"

They spilt the difference interestingly between the kind of vest clad occult rock that was becoming a thing over ten years ago and Siouxsie influenced post-punk. They keep the driving punk like guitar taunt. "I Have No Face" looms like the storm that never comes down. I cannot blame them for not giving you what was expected. There is more of a creepy feeling to "Murderer". It comes close enough to being doom for people who are into doom, without actually being doom. They straddle a few stylistic fences, without being boxed into any of them. They dynamics of this song are what It felt like the previous song was promising but are being delivered here. They flirt with the Coven influenced realm of proto doom on "Caress My Thoughts". The organ in the background brings Alice Cooper to mind.

"Leave Me Here to Die" has a soulful vocal that I can appreciate. It's like the gospel of Northern Eutrope, rather than the blues based American form. "Massacre" has a more psychedelic swirl to its languor. The vocals weave around the riff. I will give this album a 9 and see how it grows on me they capture moods in equal measure to sounds which gives them the upper hand when it comes to song writing. With that said this is a dense dark listen , while in the best way possible not something you will typically listen to on the way to the grocery store, but excels at what it does, which is murky to defines as it rides a line this band has created for themselves between doom and post-punk. Occult gloom might be the best phrase, it comes out on Svart Records December 9th.