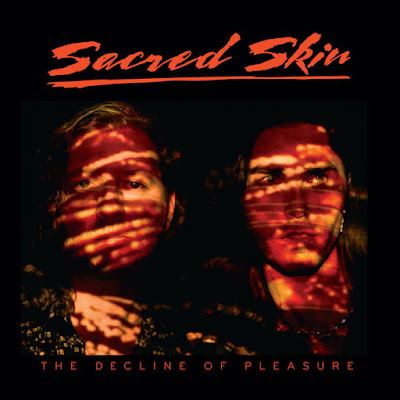 This album by the LA duo came out in May and flew under the radar. Their synths summon sounds that are pleasing to my ears as the carry a familiar New Romantic ring to them not unlike the earlier work of Depeche Mode. They nail the 80s new wave sound, which is a sweet spot, and while they are darker than the pop music of the day, which is enough for them to belong here, it is not enough to really grab me in the manner of a band like say Vision Video. They do get into the darker side of synth wave on " Fever" which is the first song that really resonates with me. I also enjoy when they use a thicker atmosphere on songs like "Far Away".

They use a ticker synth-wave groove set against more Cure like guitar on "Anathema". Everything sounds good, but not sure if an instrumental is what makes the best use of their time. They make up for it with a better uses of synth grooves and jangly new wave guitars on "No Surprise". It also has one of the better choruses I have heard at six songs deep into the album. There are a few moments when they begin to remind me of the Faint. There are some of the songs that works off a tried-and-true formula of the times, though the hooks are not as sharp. To their credit, capturing the sound from this era does not eclipse the value of songs.

The shadows begin to grow denser around the sonics of " Stay Awake". There isa smoother melody that allows "Alive in the Night" to flow more like a 90s alternative radio hit than, something from the 80s. The last song "Eyes Closed" is also not fully possessed by the pulse of the 80s. I am fine with this as it creates a space to hear who these guys really are when they step out from behind the shroud of neon.I will give this album a 9, as the groove are more than just fan service to the 80s. These guys have an identity behind that which is conveyed in these clever alternative pop songs.