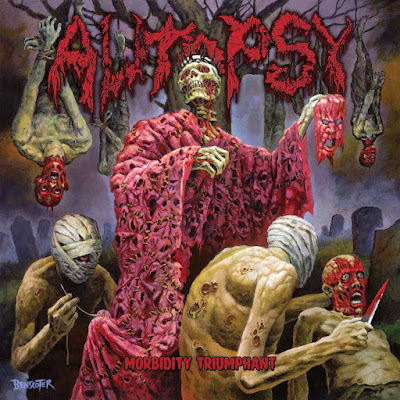 These guys have been around since 1989. This leaves more questions than it answers when the album kicks off with a very atypical blast of vomited speed. Sure, it is the death metal standard, but shouldn't these guys have gotten that out of their system by now? As this album progresses, they do, and you begin to hear the kind of songwriting you might expect from these veterans. The vocals are generally garbled cookie monster growls, but that is kinda what you signed up for. When it gets to "the Voracious One" then they raise the bar for themselves and makes me think wait, why didn't you guys give us this kinda shit from the get-go. Now that I am recovered from the rough start this album got, let's see if they can keep bringing it like this.
"Born in Blood" is more deliberate. It accelerates into a more punked thrashiness, which I can at least respect. The bass player from Brainoil, is the only new member, so their sound is pretty much intact. The mood is carried over into the somewhat hookier riff shuffle that is "Flesh Strewn Temple", bleeds with a   slower vibe is enough to make this throb with a darker pulse. When it speeds up there is more of an early Death feel to it. They bust out guitar solos here as well. The creepily angular nature of "Tapestry of Scars", is almost enough to offset the more typical raging moments of hyper aggression that are expected
The more rushed speed of "Knife Slice, Axe Chop" gives it a punkish feel. The bass tone is super nasty, so when it slows down things get dark. It is a more dynamic song than you might expect from this kind of thing. They are celebrating the nasty chaos their instruments summon by the time we get to "Skin by Skin". The doomier touches are welcome to balance the chaotic craziness of the drumming. "Maggots in the Mirror" continues the raw unhinged punishment they continue to inflict upon your ears. The more deliberate focus of "Slaughterer of Souls " folds under the temptation to blast off into guitar solos. They close the album with more of a death doom tone when they creep into "Your Eyes Will Turn to Dust". It takes a wrong turn into a guitar solo, when I was hoping they would take a chance and not do something as predictable. With that said they are still good at what they do, I will give this album a 8,5.
Posted by Wilcifer at 7:08 PM