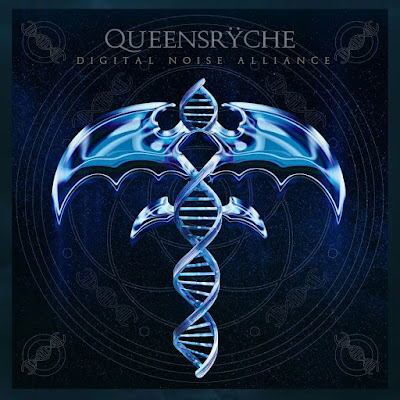 Queensryche used to be one of my favorite bands, so this is really difficult to reconcile. Now down to two original members, this band has made a fourth album with Todd La Torre, and they feel more like a tribute than ever. They are playing Mindcrime like riffs, but with none of the clever hooks of songwriting smarts. So, if you are looking for classic Queensryche sound, they have you covered. If you want the kind of progressive metal Queensryche pioneered, then considered this more regressive. "Lost in Sorrow" is the first song that works for me, because it grooves of a darker "Rage for Order" riffing.  Then the fall back into the churning miasma of things that should sounds like Queensryche, but lack the x factor, that is Geoff Tate.
"Behind These Walls" works much better as it is darker and heavier. The emotion behind Todd's prefinance, and it's funny that they have Grillo from Kamelot on the drums as that is who this reminds me of. They are not as effective on "Nocturnal Light" though it is better than say the second song on this album. The more deliberate groove certainly helps. "Out of the Black" might not sound like the best the band has done, but at least it sounds like what they do. The biggest problem seems to be the hooks do not hit like they did with Tate, it is how the melodies are constructed. This is why Dio worked as a replacement for Ozzy, he was not trying to write songs that sounded like Ozzy. He did his own thing.
"Forest" seems to understand where the band was going on albums like "Empire". Though it is not "Silent Lucidity" but wants to go in that direction.  They do recapture the Pink Floyd like guitar tone they had for that. "Realms "begins to create what would be a better Kamelot song than we have heard from that band in some time, is this really Queensryche. Going back to the Dio analogy, the albums he made with Sabbath are still Sabbath, mainly this is because the two major songwriters were intact. Without Chris Degarmo, the band could still make it as they had Tate, without him we are seeing how the core of the band is taxed. They do stumble into the band they used to be on songs like "Hold On".  But then we have the problem with the choruses again.
Sure "Tormentum" is one of the heaviest songs released under the band's name, but is this who they are, it sounds more like a bookend for a guitar solo. Is this good generic metal with a high dexterity score? Yes. If that is what you want, then they struck gold. It also means you are a little too easy to please. Not the first cover they have done, with Tate they have a whole album of them. Todd pulls of a convincing Billy Idol for the cover of "Robel Tell". I wish we could have heard more of his lower register as it would have been more authentic for where the band was going. I will round this down because it's a great Kamelot album, but not the best Queensryche album, with that said there is still some great metal that is just not who this band is within.
Posted by Wilcifer at 8:38 AM