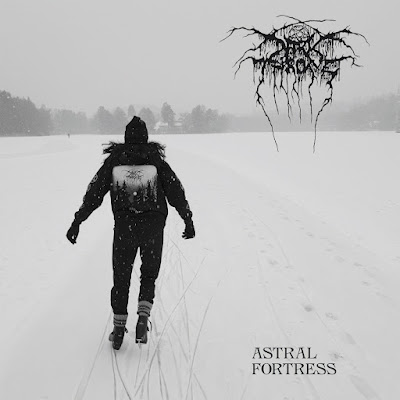 On their 19th album it's good to hear these guys get back in the direction of black metal. Their last album felt like a tribute to Celtic Frost.  The opening track to their newest effort moves at a very deliberate pulse into a darker and more depressing place. They do pick up to a proto thrash speed, so the love of the classic still flows freely in their veins.  They head in a more Venoim direction on the second song. It is pretty straight forward, mood wise, not as interesting as the opening track as it's kind of color by numbers post-2010 Darkthrone. It does not suck either it is just not all that memorable.

These guys are at their most impressive when they bring chilling atmosphere and eerie guitar melodies. Synths are more dominant on "Stalagmite Necklace". The synths might be a point of contention for some, but I welcome anything that adds sonic dimensions and keeps these guys from becoming the new AC/DC of black metal. "The Sea Beneath the Seas of the Sea" is doomier. It rings out with darker intentions. Nothing close to a blast beat when the chug gets more deliberate. Sure, there is a touch of Celtic Frost to this, but it is done in a more effective manner than the last album. This is much more inspiring to head bang to.

There is more of a nasty black metal feel to mid paced grind of "Kevorkian Times". I would not say this is a doom album, though those elements run through this album, yet are more focused on darkness and brooding than any mournful or sorrowful feeling. I appreciate the bleakness present at times here. The riffs on this album are more thoughtful than anything we have heard from them in the past couple albums. They are in a more experimental mood, as there is a weird interlude before the last song. The harmonized guitar lines leading into "Eon2" is pretty killer. While the album opens up with a rawer sound, it evolves into a greater production quality as it progresses.  I will round this up to a 10 which I have not gotten to do with these guys in a minute, so that brings me a smile. If you are a Darkthrone fan you can know you are going to like this, keyboards and all.