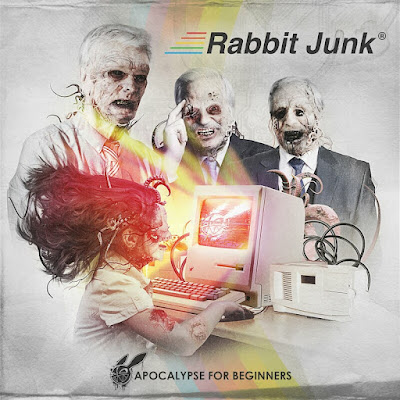 These guys are on the fun trailer park nu-metal side of industrial. The emphasis on fun. Very groove and hook oriented. Growled vocals at time collide with almost dub-step sounds. They are joined by Amelia Arsenic on "Stone Cold", which reminds me a little of Mindless Self Indulgence, particularly when his singing gets more melodic. Industrial music should be equal parts apocalypse and catchy melodies contrasting the militant crunch. "Nostromo" brings back the more aggressive nu-metal vocal, though it does not feel quite as effective there.

The more melodic future pop sound of the band as heard on "Love is Hell" is more of a winner for me. It is met with various metallic punches, which work better in this context. This would have been huge back in the days of Myspace. "the Grind" sounds like Cartman starts rapping over it. It is on the poppier side, but the guitars try to keep it anchored. "Bodies" starts off with surf rock guitar before building into more of a nu-metal thing. It's more up tempo, than the bulk of what they have done until it breaks down for the verses.

"Praetorian Aureol" is the first song that strike me as filler. It does shift into their more nu-metal harsh vocal dynamic. The melodies and grooves just do not feel as hooky to me. "Rabbit Out of Hiding" is more dynamic in the shift from gothy ballad to the new wave bounce it takes on. The driving guitars thrusting it into the fight. The dub step attack returns on the last song and is set against the more future pop like melodies.  I will give this album a 9, as it is a lot of fun, and they accomplished what they set out to do with it, even with the nu-metal tendencies.