Fleshwater : "We're Not Here to be Loved" 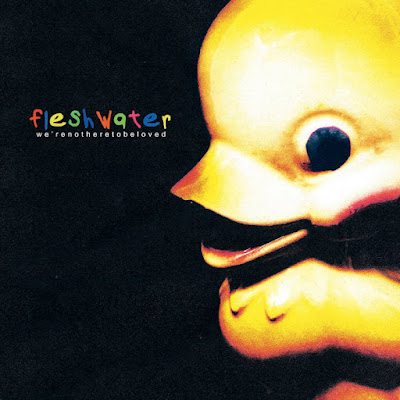 This post-grunge bands features members of Vein.Fm. It is a place where shoe gaze meets harder hitting post -hardcore, putting it in the neighborhood sonically of older Deftones. The groove on the opening track recalls the early days of Deftones' nu-metal path. The higher pitched crooned vocals, have the sleepy emoting of early Smashing Pumpkins.  You can hear traces of bands like Failure and Quicksand, in the winding sinew of the riffs that snake around the crash of dynamic punches. By the times we get to "Woohoo" many of the sounds are being to blend into one churning wall of fuzzed out riffage. Here they are played faster with more kick to them. I think from this point on with the album I am going to need more dynamics. Though if you were wanting them to lean more into the side of hard core it is the most aggressive moment so far.

"Linda Claire" is more deliberate with the almost plodding lumber of the guitars. The lyrics are pretty clever here. Most of the vocals on this album are just for texture rather than trying to set up big catchy hooks. At under a minute and a half "Kiss the Ladder" for all rights should be less of a song, and more of an idea, but they squeeze a great deal into it. The dense distorted bass that hammers into "Enjoy", but the jerks you back with a more thoughtful vocal and a keen sense of dynamics in order to pulls something like this song off.  The vocals have room to breathe in all the right places.

Even amid the stormy dissonance they throw against melody the vocals still find their place to float around. At two minutes they do not develop this one like they did that previous ditty which was under the two-minute mark. The last song is heavier, with harsher vocals snarling out from the twisting riffs. The addition of a female vocal cuts through the din pretty well. This additional vocal is hookier than the main vocal. I will give this album a 9, I really enjoyed it even when the songs were not at their most focus the sonic cloud, they are sailed in on still works well. This drops November 11th on Closed Casket Activities.