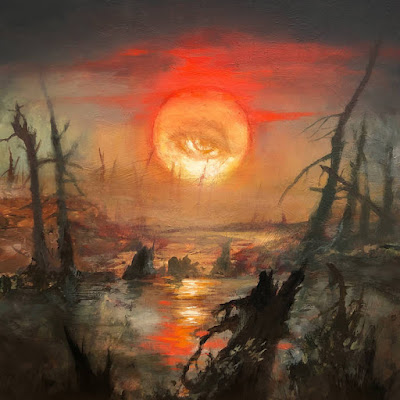 This band features singer song writer Joshua Strachan of Vaura. They infuse post-punk and goth atmosphere with the anthemic kick of hard rock. The opening track is a more subdued calm before the storm piece that feels more like an intro than what unfolds on the palm muted clouds gathering of "the Final Resistance". To be a band from Brooklyn it is impressive that they are not so concerned with trying to be cool that they forget to rock out and even throw some guitar solos in. "Nightbound" finds the band setting more space in the verses for the vocals to take a more emotive approach that recalls 80s goth.

The bass line to " No Good Answers" has more growl. The vocals seem to be getting more emotional with each song. There is an odd time change going into the chorus, which is one of the few twists of the metal DNA left over from Vaura. "Behind the Veil of the Living World"  is the first song where the dense arrangement crowd the vocals and dampens the melody to where the songs is not as catchy as the others. It lets up on the chorus a bit, but the verses are somewhat obtuse. The pounding toms of "Pathfinder" picked up the pace of the tension in a dramatic manner. "Scarlet Horizon" falls back on the bass line though is fairly upbeat, layered with ambient guitar.

They shift to a more introspective moodiness on "A Stranger in this Century". The vocals have more room. However more indulgent and not one of the albums more captivating melodies. "In Shadow Light" works better as things are moving. The vocals are key to this band and here they are more inspired. The dynamics of the last song ache with more nostalgia toward classic goth, which I prefer more than some of their grandiose emoting.  I will give this album a 9, it's a more romantic departure from what Vaura was doing, but effective at capture that vibe.