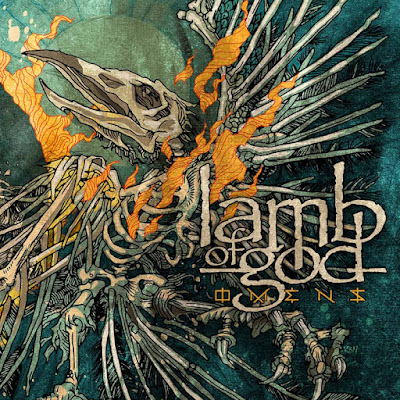 When the opening track kicks in, it's clear these guys are still at the top of their game. They are also carrying the torch for Pantera. Art Cruz seems pretty content to fill in on the drums and does what Chris Adler did just as well. My only problem with this band can be heard pretty clearly in the second song. They just do one thing really well; this gives their album a limited range of dynamics. While it was effective on the first song aside from an atmospheric break down before the last minute, it could be the same song in terms of tempo and dynamics. A great deal of this uniformity falls upon Randy Blythe who is pretty limited as a vocalist. In terms of in-your-face intensity Pantera did something similar, but Phil is a great singer who gave songs their own identity.

At any moment now on "To the Grave" Blythe might utter ' Walk on Home Boy".  They do have some mean riffs, which is why the rule here of "cool riffs alone does not a good song make" hits bands like these guys hard. They thrash out even faster on "Ditch". The lyrics to the song are pretty on point and the song grows on me. The title track has a catchy enough anthemic chorus to work. The dark vibe to "Gommorah" is cool, though they are quick to get caught back up in their chugs. It is more memorable than "Ill Designs" which feels more like plodding filler despite how energetic they try to be with it. He uses more of a growl on "Greyscale", and overall, they care about the songwriting more than the dialed in approach of some of this album's offerings.

Playing it faster does not mean that you are making a better song. It does try to prop up Randy's claims he is a punk not a metal head. However, it is the songs more metal leanings that make it listenable. The darker moodiness that they go off into for "September Song" is what this album needed more of all along. Even though it is just a calm before the storm. The meat of the matter here is more of the same from these guys, with marginally more nuance. The break down at the end is pretty effective. I will give this album an 8.5, as it is clear they are great at what they do the question is are you into this kind of meat and potatoes metal. For me I have bands that suit my tastes in this regard better. But fans should find it gives them what they want.