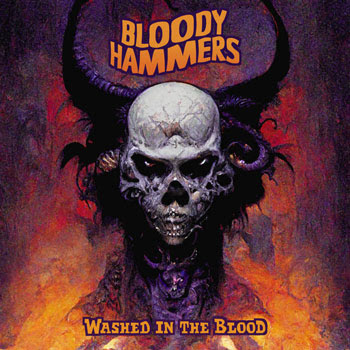 Their last album was great, I am not sure how they are going to meet such a high bar. They choose to do it by getting a great deal heavier in the riffs department. They still have catchy choruses thanks to the croon of the strong baritone vocals. Less punk influence, the only way I can hear someone comparing it to the Misfits, is on the chorus, and then it's more of a stretch, there is a more dynamic shift going into the moodiness of the second song, to contrast the driving guitars. The chorus feels more like power metal in how epic it gets. If I did not know the music industry better, I would say this is the album that will make them a more mainstream band. Just from how they are able to go in a heavier and more melodic band at the same time, is by rights enough to make them a bigger band than Ghost, but that is not how the world works.

The horror theme continues to prevail with "At Midnight I'll Take Your Soul". The chorus to this one does revert back to an almost pop punk feel, but the song itself works. "Water to the Dead" hits like the kind of hard rock Metallica churned on the Black Album, though the chorus is more nuanced.  They go in an even more radio friendly direction in terms of hard rock, with the hooks and groove to " the Howling". A song called "Last Rites of Lucifer" is not getting any radio play in America, and aside from being just as catchy as the other songs, the main riff is also more aggressive. It reminds me of their previous album which is a good thing.

"Dead Will Walk" works off a similar formula as the other songs. perhaps the first that feels more like filler and not as inspired. The last song is darker and more brooding, The vocals are given more room to emote. It is a change of pace from the rest of the album which is pretty welcome. The most goth song of the album for sure.  I will round this down to a 9.5, which is still the highest tier of musical talent and songwriting, just not perfect, because at times it feels like they are trying too hard for a radio sound, but maybe they are just into arena rock anthems, might just need to grow on me.