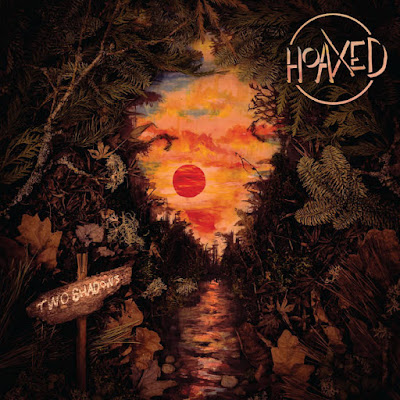 This Portland duo creates dark and driving rock that works of mesmerizing melodies. The drumming is influenced by metal, though the overall sound while ominous not broods more than it gets in your face. "the Knowing" finds the drums carrying less thunder than the opener, which is fine since if all drums had the same thunder, it would make the album too uniform, the chorus, has an interesting hook to it. The vocal harmonies are very graceful and their song writing compact. Something about the vibe at times makes me think of older Scorpions. The bass emboldening "For Love" helps vary the dynamics, s they tend to sonically paint the songs with similar colors. This fact is more apparent by the time we get to "Grand Illusions"

The guitar tone shifts, and the creeping palm muted tension helps "High Seas" stand out from the previous songs. The vocal melodies, hover in a similar croon. At times they feel like if Veruca Salt took a turn into a different part of the 90s. I think despite the big drum sound, when they lean into the more hypnotizing drone of songs like "Guilty Ones" they are more in their sweet spot than trying to harder to be heavier than where the vocals are capable of going. The simmering storm of shadows they begin to summon on " Where Good Won't Go". It reminds me of when Metallica ventured away from being a metal band in the late 90s, as there is a smoky grunge feel to it.

The last song feels like their take on "Paint it Black".  Though there is more of a witchy retro-metal witchy feel that makes me think of the Devils Blood. The drummer really loves her double bass, which keeps trying to pull the songs in a more metal direction where the atmosphere of the vocals and guitar want to pull it back in a more 90s goth path. I think this tug of war plays to the benefit of their sound. I will give this album a 9.5 and see how it grows on me with time.