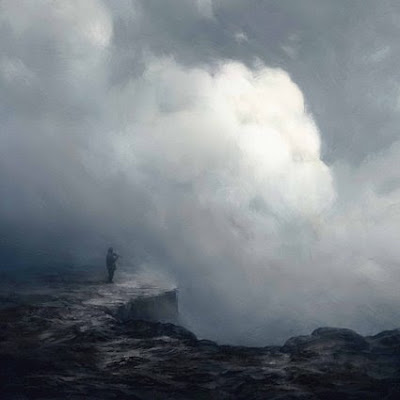 During the Gothtober series I try to show a wide spectrum of sub-genres within the goth scene. Noe folk being one that is receiving lots of rise, given the success of Heilung , who keeps playing larger venues. Here is one from Sweden whose haunting sound is dark enough to belong here. The first track works off more ambiance, leaving the second piece to prove they can actually write songs and not just make the most of ancient sounds.  Leaning on the feel of folk melodies, this is not the hookiest of song, but if you are getting high and chilling it would make a nice backdrop.

"the Mare" continues to find atmosphere and mood at the center of their focus. Spoken male vocals join the more ethereal female vocal to ground it a little. The first song that really resonates with me is the title track that finds them weaving a very memorable melody that flows well with the minimal folk instrumentation. Unlike Heilung, they are not going for an aggressive tribal feel. They flow really well on ""the Cleansing" as the vocal take on a lower goth croak. Everything is well layered and sounds great. The six track just sounds like a jammed-out extension of the previous song.

The last song is more of a guided meditation outro piece. The sounds created work really well, but I wish there was more song focus on this album, since we they do chose to focus on songs the results are great. Hopefully future releases will find them growing into the song side of what they do as those were pretty impress and could place them as peers of bands like Wardruna. AS things stand now, a little more atmosphere and mood than song, so I will give this album a 7.5.  Fans of Neo-folk take not as it is not the most prolific sub-genre.