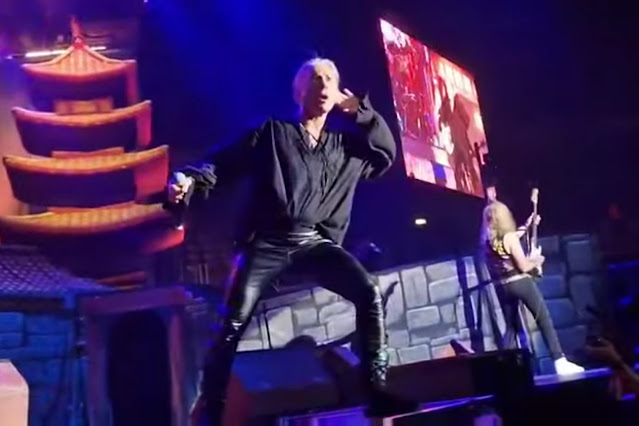 Having seen the band in their 80s prime the bar is high. They are always great live, but Bruce is 64 and Niko is 70 with the rest of the band falling in-between, the question of do they still have it looms. They are not the Rolling Stones. Not to knock Mick Jagger, but his voice works off personality and attitude, where Bruce's vocal parts are closer to opera than metal. Musical they are more complex and faster songs that require higher dexterity and constitution scores than the warmed over 60s rock hits of the Stones. I am certain of not wanting to see Maiden ten years from now. This arena tour is a higher and more lavish production. This show marked the end of this half of the tour, but rather than the band seeming burned out from the rigors of the road, it seemed like the 57 shows they played before this one was what they needed to warm up.

Despite the crowd not sure how to react, it was a smart move to play the three new songs first. Tears For Fears, took a similar approach. It makes sense as Bruce was able to warm his voice up with songs most recently recorded so he could warm his pipes up, back when I saw them open up with "Aces High", it was too much, and he went into the show winded and struggling to hit the high notes. When they closed with it , he had a better time with it. Did he nail every high not? No, but he got the job done by tackling it to the best of his current abilities. For six old Brits they ran and jumped across the stage better than most bands in their 20s. For this arena tour the stage show was dialed up. Multiple set changes, it started out as a Japanese temple and shifted to a cathedral to a hellish landscape as the band took you on a journey.

All of the big crowd pleasers were saved for the second half of the show. This gradually found the momentum build until they get to "Aces High" which is the bands highest energy song. Not the loudest show I am been to, but they used enough volume to get the job done, after all they are Iron Maiden who are next to Black Sabbath are the most important band in metal. They proved they are still worthy of that title and showed you how they earned it. The fifteen songs, moved quickly, there we no looking at your watch moments, considering how as a society our attention spans have atrophied this is magic in and of itself. If you like metal, and even if you are not the biggest Maiden fan it is a must to see them within the next fan years, they do not disappoint and the changes in the set list made them even better than the past two times I have seen them.