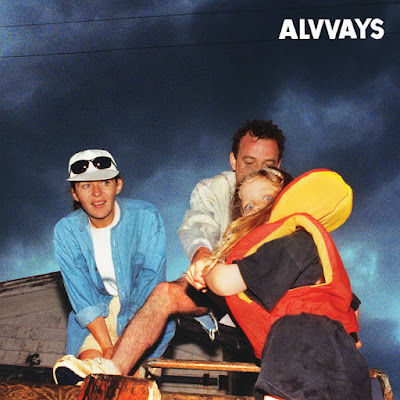 With a sound that is from a woozy corner of the 90s, this band from Canada manages to fuse quaint pop ditties with a swirl of ambiance. What is going to be key for them going forward is how well they blend to the sides of what they do. There are melodies that emerge which at times can be happier than what I normally listen to . However, when tempered to the more surreal drug drip of effects for the disenfranchised lyrics to ponder over things work out for the best as heard on "Easy on Your Own". The jangle of Smiths like guitars on "After the Earthquake" keeps the song coasting in a more organic indie rock direction. This works better than when they just default to the most likely sounds of the 90s. Thought even on default mode there ingrained sense of melodies keeps them from falling into mediocrity.

They begin to lean more in an indie rock direction with "Pressed". The jangle of the guitar flowing like a lazy wine on a fall afternoon. Sometimes this feels more dialed in than others. The thoughtful guitars of "Many Mirrors" ambles hopefully on, though the colors the use are beginning to sound more uniform halfway into the album.  I appreciate the new wave quirk to "Very Online Guy".  They knock it out of the park when going for the bigger pop melodies on "Velveteen". This shows all the hipster edges aside, when it comes down to it, they can write songs. They are also pretty versatile mood wise when it comes to pop as heard on "Tile by Tile". The more poppy garage rock on "Pomeranian Spinster" is not my thing. They split the different on "Belinda Says " that marries youthful optimism with mature songwriting.

All of their songs are three-minute ditties so when they do not vibe with me as much, it is pretty harmless in regard to time invested in listening to them. With 14 songs there is a bigger margin for error. It feels like some of the steam in waning by the time we get to the languid "Bored in Bristol". The first ballad that eases into a more folk sound is "Lottery Noises" they amble out of this with an almost country feel, the last song sounds like a demo Lana Del Rey might have made if she was really stoned. I will give this album that was five years in the making a 9, could have been trimmed a couple of it's songs, but there are some excellent pop moments that are hazy enough to appeal to bong smokers more than Taylor Swift fans.