Interpol : "the Other Side of Make Believe" 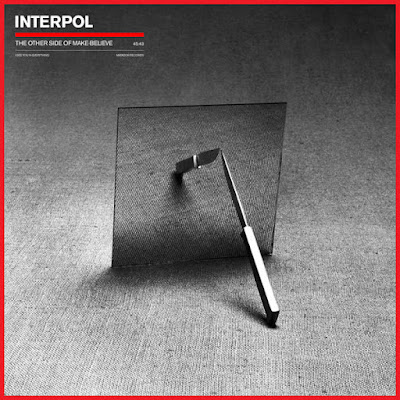 I can get over the fact Interpol is no longer as dark as they once were. Gone is the stark tension of post-punk. Now we have rather breezy indie rock that does what Arcade Fire did in a less orchestrated and more organic fashion. The Beatles are more of an influence than Joy Division with songs like "Fables". Despite this gradual stylistic shift that has brough them to this place over the years, they are still great songwriters. The first song that sonically remembers who they once were is "Into the Night". The vocal musing is more delicate. The interplay of angular guitar is really well done.

The guitar is the focal point for most of the album as the vocals are mix slightly behind it. Piano plays a larger role than guitar in "Something Changed".  It works, though not what sounds like the most effective choice to define who the band is.  This is balanced out by the more familiar sounds of "Renegade Hearts". "Passenger" flows like a ride on a lazy river, made up of sparkling guitar sounds. "Greenwich" has a melody that is catchy even when it drones off the melodic theme. Lyrically the hint of desperation, puts it mood wise in a place that is more fitting for the band's legacy. The syncopation of the guitar driving "Gran Hotel" puts this back in focus with the band's original sonic mission statement.

Never a great vocalist, it's the cadence the vocals dance in that makes "Big Shot City " work. The guitar tones are really great, and the overall production of this album works well. When the vocals are used more like an atmospheric layer than despondent narrative, the results are less sure. I will however this album a 9.5, as the songwriting and mood, while different still retains who they are and works as it is easy on the ears and I find myself just leaving it on to play. I am sure it will grow on me.