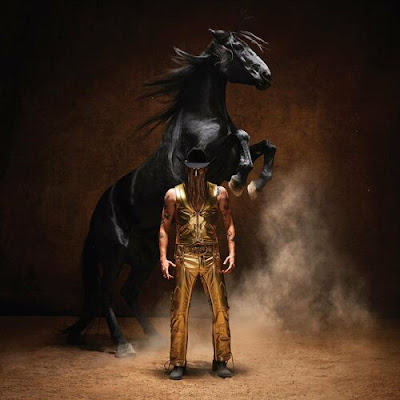 Peck has grown his sound since "Pony". His voice has filled out into a more confident baritone croon that owes in equal amounts to Johnny Cash and Elvis. He does include is his love for Elvis in the lyrics for "Outta Time". His yodel in the chorus of "the Curse of the Blackened Eye" feels more fluid than when he did this on his earlier work. He also hit pretty solid notes from his chest register. There is a more organic feel when it comes to how the interplay of the music backing him. The guitar tones reverberate with pristine lushness than accent the Western in country western. "Outta Time" is straight forward in the strum it opens with. The full band joining in as the song progresses.

There is more melancholy in the guitar than his vocals this time around. Even on "C'mon Boby Cry" there is a Neil Diamond like hopefulness to the mood the song. The 60s vibe is a thematic element of the album's overall emotional currency.  He experiments more with the arrangements on this album. At many points in this album Chris Isaak is brought to mind. There are equal moments of folk influence on this album. Sometimes this is colored by a smoky rambling campfire story telling. This is done with varying levels of hooks depending on the story being told. Sometimes this intent seems to place more focus on atmosphere.

The title track has more of a rock feel to it. He simmers and reflects on "Trample Out the Days" which reminds me a little of 80s Elvis. "Blush" shows him marrying the best of his story telling with his growing knack for catchy songwriting, that can sometimes co-exist effectively.  He pulls this off again on "Hexxie Mountain".  "Let Me Drown" is more like Vegas Elvis. He steps on the gas back into rock n roll on "Any Turn" which doesn't always play to his strengths as a songwriter, but I appreciate his enthusiasm going for it. "City of Gold" is a more reflective folk. He closes the album with a more traditional country feel. I will give this album a 9.5, he tries some new things, and they generally work, empowering a newfound strength to his voice.