Gothtober : Ayria : 'This is My Battle Cry" 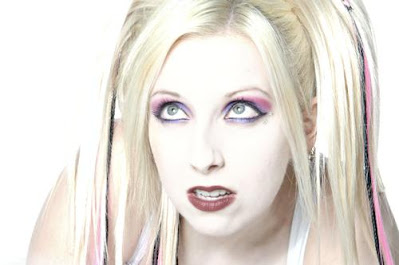 The opener thump is pretty on point for what this artist does. She fuses future pop with dark wave, it has been a minute since I have given any of her work a listen as despite the goth trappings, she is pretty sugary sweet. "Stranger Danger" owes more to Madonna than other dark wave artists. There is a marginally darker pulse to "Why Aren't You Dead Yet" where she ponders what things might be like if she could get away with murder. The 89s runs deep in the synth riffs. The darker steaminess simmers to maximum effectiveness for her, on "Irreplaceable". The melody works much better to slither around the synth grooves.

"Erase Me from You" is the first song that feels like filler. More formula than feeling, despite the personal lyrics.  "We Can't Love Here Anymore" works where the previous song did not. Alot of the weight falls on Jennifer Pankin and what she decides to do with her voice. I am fine with this sounding more like Lords of Acid on " No One Asked You" . It's got some pretty dope strip club booty bass in it. The Tik Tok kids should be twerking to this in no time. It's stupid fun, but well done and might be the album's best song. The vocals are more refined on "the Next Time" but the synths backing her are less inspired.

There is a more of a new wave feel to "Too Much Noise". The sounds are better than previous song, but the vocals do not fit as airtight with the hooks. The verses are almost rapped.  The retro 89s beat to the last song works really well, though it becomes another sound vs song battle, the hook does not feel as sharp as what she has shown us she is capable of earlier on this album. I will give this one a 9, despite owing a hug debt to the 80s I think it works better than most of what is on the radio these days,