Gothtober-Ultra Sunn: "The Night is Mine" 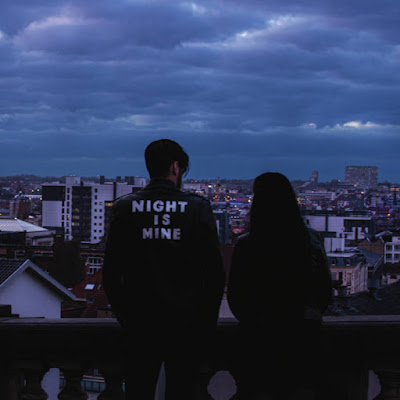 Yes, the opening track of this Belgian dark wave duo's new EP is what the kinds call a slapper. Yet I am hesitant to cover a large number of these sort of acts as it paints the goth scene into a monochrome corner. You can spin energetic goth songs with guitars as this sort of thing while fun at times, is the lowest common denominator when it comes to music. "Keep Your Eyes Peeled " would be as good as the title track except for the fact after you heard those synths sounds and that beat work the first time the second time is never going to leave the same impact. This album does have several remixes of song that have previously appeared on this album so we can test the theory of the drum machine in more depth as it progresses.

Being from Belgium the Germany industrial influence can be felt on the stark vocals of "Distress". The vocals are at a low croon, that is stiffly stoic, while delivering sometimes vulnerable lyrics. The first remix is of the title track that finds more bunce in the beat, and a marginally more industrial feel. By industrial it feels like the pre- Nine Inch Nails origins of the genre. Then Kontravoid remixes the second song. The pulse of the song is faster. It is a pretty effective second approach to the song. More dance oriented. There is a more techno cadence to the synth lines of this one. You could almost say the same thing about the synth groove that drive "Waves' as it becomes apparent, they have a formula in place when it comes to songwriting. The song fades into more of a drone as it rides the beat.

The second remix of the title track is really going to the well too many times. The instrumental version o "Keep Your Eyes Peeled" feels the same way since once you take the vocals away it loses any sense of their identity, as that is one of the key facotrs that keeps them from being faceless electronic music. But for what they are doing this is more song focused than the average goth night  bump and grind. I will give it an 8.5.