Bitter Branches : "Your Neighbors are Failures" 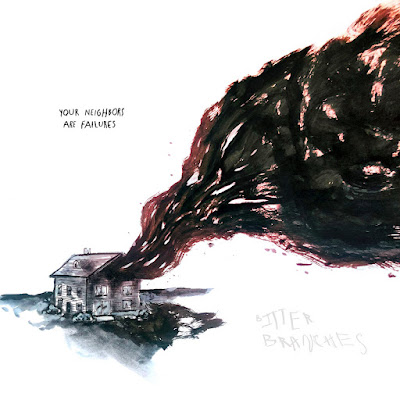 Here is an album that eluded me this year. It dropped back in February. It is surprising this album did not garner more buzz considering it features former members of Deadguy and Kiss it Goodbye, this band from Philly has both brains and brawn when it comes to playing modern hard core. Equal Vision released this which is equally surprising as I did not know that label was still pumping out, music, but things make more sense knowing it comes from them. The bass is burly and compliments the rowdier noise rock attitude. They sometimes employ a more herky jerky angular manner of attack when it comes to the riffs. There is some nice dissonance to "the Man Who Never Cries". The chords ring out with a warmth not unlike bands from the late 90s.
There is not a great deal of metal influence on these guys, which I think I have had more than my fair share of metal core this year, so I am fine with that. They do use a palm muted riff with some groove to it, but not a break down in sight so we are good.  The guitars sound like they are running right into the amp with little in the way of effects. At times this creates a very Clutch like rock n roll feel. "Have You Tried Jogging" finds the Clutch vibe there, but the anger conveyed in the music is what keeps this from jsut being rock n roll. As heard on "Chewing Vitamins" tense and ugly does not always mean the song is going somewhere.
"Solo Trip" is the first song with any kind of metal intentions behind it. The music gets darker and more melodic on "Monsters Among Us", as the vocals are more spoken. The guitar tones are great as they step on the reverb pedals. They save some twists and turns for the last song, which is fairly dynamic. I will give this album a 9, these guys have age with a great deal of grace and still prove themselves angry enough to make hard core better than a dozen younger bands combined.
Posted by Wilcifer at 8:39 PM