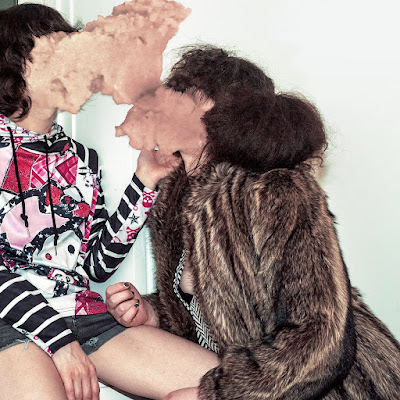 Here is something for the young goths with turquoise hair. The Canadian duo is on the more spastic noise ridden side of industrial. Think Pigface here. Not as dark as Skinny Puppy, but they use noise to a similar abrasive effect. This is too confrontational for the dance floor. The vocals are often screamed, but sometimes spoken in a lower sultrier voice and at other times rapped. These girls are all over the place. I did not know that Canada had the kind of drug problem that could produce this kind of music. They are of a different generation one that pulls inspiration from Peaches and Slipknot in equal measure. Not as polished at is as say Poppy, they are carrying the industrial torch.

The first hint at something dancey is also still on the verge of convulsing. It is also at time not unlike the Prodigy. I know a lot of names are randomly being pulled out of the air, but that is also how they drew inspiration for this batch of crazy songs. They gain some pop smarts to rein things in for "doomspiral". The song becomes the core for the odd sounds to haunt the outside of. While the most popular song is "Money Makes You Stupid" it leans almost too heavily on trap rapping for my tastes. The back tracks sound like lo-fi video games run through the filter of trashy goblins.

"Gay Ugly and Hard to Understand" is what Kesha might sound like if she totally lost her mind. Sometimes more Halloweenish sounds come warbling in under the snarling exorcism these girls are undergoing here. The last song, ambles like indie pop. This is industrial for the Tiktok generation. I can appreciate, but they are no threat to the old guard in terms of quality. Sometimes the drugs hit them the wrong way in the studio and for that reason I will round this down to an 8. It is more goth adjacent than your average darker industrial.