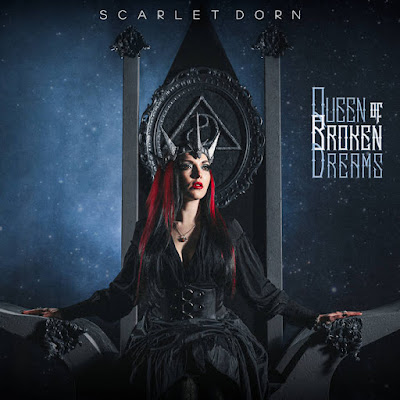 This German bands makes the kind of music that is very European, yet somehow sounds like it could be the soundtrack of the newest Netflix anime series. It is certainly goth on the outside and being marketed as such, but how goth is it, well you know you can rely on us to give you that answer. The first song bounces with too much of an upbeat vibe but is well done for what it is. Things not only have more darkness to to them, though at the happier end of the spectrum for what I consider goth. The title track has a ton of keyboards layered over the metal of the song. While she singings in a dramatic manner that is not unlike what she has done on the first two songs.  It feels a little like when Within Temptation went in more of a nu-metal direction.

Things feel more organic on the sultry crunch of  "Your Highness". The first song I notice sexuality expressed in her voice.  They use some restrain on the chorus though that is still where the pop influence continues to lie. " A Light That Blinds the Truth" is a little heavy handed on the chorus, but still well done for what this is, fans of Nightwish, looking for something with less opera to it will certainly like this. "Meteor" sounds like a less guitar focused Pretty Reckless ballad, if Taylor used her head register at all. There is also a late 90s feel to it.

There is still a ghost of pop balladry haunting " Unstill Life". This leaves the song on the Nightwish side of flowery, though what is going down over the course of this album is much less metal than Nightwish.  Aside from a crunchy guitar here and there makes it not very metal at all, because let's face it even Nightwish is less metal than they once were. They get to a Sarah Mclaughlin level of piano ballads on "When You See Me Again". It does however have one of the album's best written choruses. "Love Wasn't Made For Me" is a lesser continuation of this theme. They work harder at crafting a better song with "What Are We to Do" the overly romantic emoting is giving a more interesting sonic back drop. The album ends with a few soaring moments that work off of the flowing melodies dressed in an abundance of pageantry It also cements the fact that this is more fluff than metal Goth in the longing romance being swept over, but not dark by any means. I will give this album a 7.