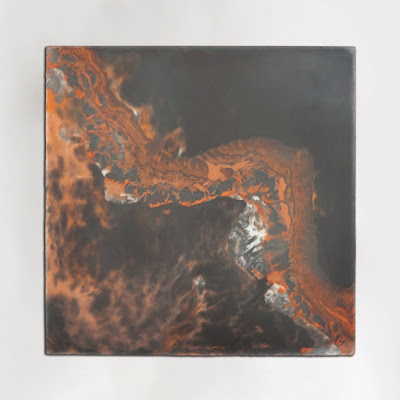 These guys are growing out of the limitations placed upon them by the post-punk revival label. Their singer Graham Sayle gives thing a more punk edge, while the guitar rings out with more atmosphere. More punk thunder booms with the guitars of "0151". The cadence of the vocals is more aggressive. The chorus smooths out a little. Sayle does actual sing more on this song. The 80s new wave influence can still be heard on some of the chord progressions. The guitar solos are much more rock than the rest of what is going down here but it still works well. My first listen to "Out Cold" found the song race by in the background. To be fair it does fall on the punk side of the equation, but with nuance on the chorus. Even when playing punk, they, still maintain a firm grasp on song writing and ow more to the early days when it was at the crossroads of rock n roll.

The guitar tone on the title track reminds me of the Cult. Which when it comes to blending atmosphere with a rock sound is pretty solid. The effects on the vocals improve their melodic quality. The song does have a woozy shoe gaze feel at times. His vocals return to more of a staccato punk phrasing on "Trauma Bonds" with the guitars being atmospherically melodic enough to balance out the overall sonic s of the song.  This puts them slightly ahead of Idles when it comes to this sonic neighborhood. The jangling guitars of "Fever Dream " are more interesting than what the vocals do on this song. This might be a case where the song just needs to grow on me, but either way it's not a deal breaker. The lyrics are pretty decent.

There is a similar feel to "Morality Test" that I got from the previous song, though the guitars are more straight up rock with less jangle to them. Thus, meaning they do not compensate for the vocals as much. As far as rock music goes, I can appreciate the more 80s arena rock feel the chord progression has. "Join Hands" takes this energy and continues to build off of it with this punk anthem. It has more of a 90s alt rock feel to it than the previous song, as the vocals form more of a melody.  However, in terms of melody it is the more melodic guitar playing that constructs "Shame" that is the band's true strength and the moodiness that lies within. I will give this album a 9.5 ,as it one of the better punk albums due to its atmosphere rather than the fire it burns with.