Gothtober-Lesser Care : "Underneath, Beside Me" 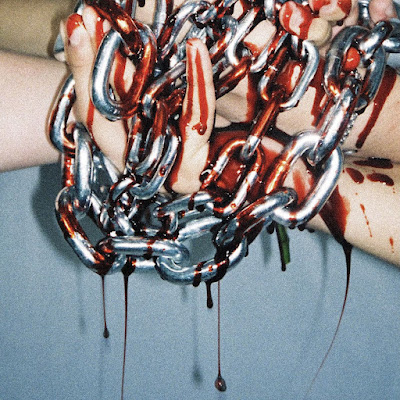 First off, this Texas band has their shit sounding great. All too often bands in this post-punk genre are so dead set in trying to get a retro sound that they create that rather than caring about how the album as a whole sound. Here the drumming and bass playing are more nuanced so that factors into their need for clarity to keep these performances crisp and popping. By the second song from these guys the synths play a bigger role and ambiance swells up to create more of a shoe gazing feel to this song. "Daylight" finds the drums bringing it in a more aggressive rock manner. The vocals drop lower and in places more balls are put into how it is crooned.
In the first three songs it is clear this band has a sound, but they come at it from three totally different angles. "Crawling Back to the Sun" finds them coasting along in a zip code closer to the Cure's. Synths fill in the empty space, but the vocals still have plenty of room to breathe. The instruments are introduced in a very organic and effective manner.  "Reflection" works off a similar formula, but with more emotive vocals that really help this song to stand out. The subtle fills the drummer does show how he is really killing for these guys. The synth that opens "Between You" feels legit and not like they are trying to go off into synth-wave.  Female vocals hover around as they drone on this for a while. It does take a more dynamic shift, so it's a song and not just an interlude.
"Cherry Picked" reminds me of another post-punk favorite around here, Dead Register. It the way it's driving, but atmosphere is thick and melodic. The vocals are not poppy, but they are catchy proving you can have it both ways. The drums ramping up for "Placement" made me think this would be a plunge into a more punk place. While that element is in place, the bass is responsible for this added beef. The vocals are not shouted by fall in line with where the energy is going. In an even impressive display of dynamics, they tone gets beefier when they throw punches. The last song is more upbeat. While this album is not dark overall it has some shades of gray flowing around it. I will round it up to a 10. Do yourself a favor and give this album a listen, the best compliment I can give it is I was midway thru when I had to go on Bandcamp and buy but. rarely do I ever buy albums as my in-box is full of promos or I find torrents. This one was worth having.
Posted by Wilcifer at 6:58 PM