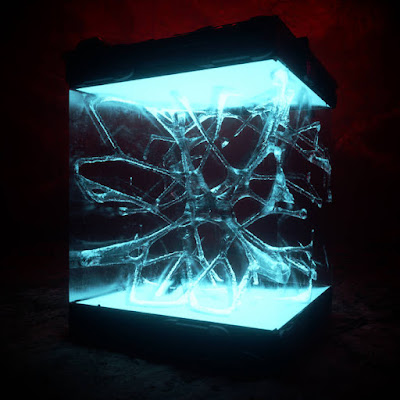 This Bristol based project is gaining momentum with their new album that was released back in April. The fact that they are so electronic focused, while not out of place at a goth /industrial night, the bang on a dance floor but when it comes to being actual songs., begin to run together. The fact they have guitar puts them ahead of most electronic acts who rely on button pushing. It sounds like someone might be beating on an actual drum kit for "Caller Unknown". When the rapped vocals surface on "Tether", they begin to sound more like an industrial version of Massive Attack.

When their fate is left to the beats and guitars alone, that is when things get murkier. There is a great deal of energy and feeling to "Silhouettes", but despite these elements sounding great, I need more of a story to be told or dynamics involved. It provides a great soundtrack to doing laundry, but that is a backdrop rather than something compelling or engaging. It is this kind of anonymous feels that makes it hard to tell when this song ends, and "Cloak & Dagger" begins. The latter being darker in mood, once I sit down to give it a solid listen. Sure, it's a driving beat, but much like the "cool riffs alone does not a good song make" the same could be applied to electronic music if you replaced riffs with beats.

"Flashforward" is alluring with it's selection of sound, but what will it do in terms of dynamics? The vocals are pretty much for texture, though the guitar does keep things moving. "Desire" at least matches it name with a melodic guitar and sensual pulse. Though ti does not stray far from where the song starts. "Over the Walls" just works off a more intense variation of the preexisting formula. The last song "Remain in Stasis" finds them bringing on a guest vocaluist, and the results are once again a industrial take on Massive Attack. I will give this an 8.5, a fun listen for what it is, but would have been even better if they had used more vocals.