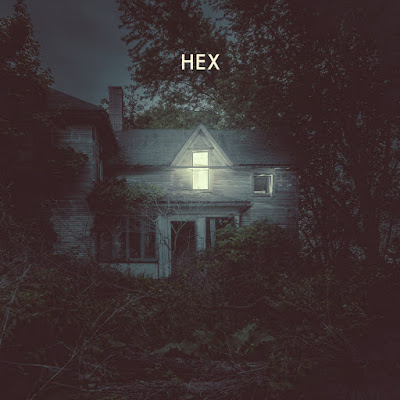 This horror themed industrial leaning band features members of Minsk, Stabbing Westward and the Atlas Moth, reminds me a little of Marilyn Manson's "Portrait of an American Family" album in how it keeps an organic almost punk core that is dressed up in darker more unsettling sonics. The opening track is about Michael Myers, making it less of a angry catharsis against society than what Manson did. "Daggers" is driving but feels more rock than electronic in its attack.  There are a great deal of John Carpenter inspired synths leading into songs. "Siren" has a more death rock feel in its swagger before roaring back at you.

By the time we get to 'Siren" they have their foot up on the monitor and are rocking out more often than not. This sounds like a long-lost goth metal album from the late 90s. Lyrically the song is an homage to the mental the kids in Nightmare on Elm Street 3 were in. The Thing is the subject of "Windows". Though it stands to be said they the references in the song itself is blatant and draped in metaphor. It is a reflection on the feelings invokes by these films, rather than a theme song to them. The title track does similar with the Argento film "Demons". It has more groove than the brooding previous song. The vocals are bellowed most frequently in a gruff baritone, though sometimes sun in a more introspective croon. At times these guys remind me of a cross between Evil Mothers and the Skatenigs.

"Fugitive" is a more upbeat punk driven anthem. They continue down a more punk inspired path with the hammering cover of  "138" . They are going by Randy Blythe, whose voice kind of blends in with the overdubs and it is hard to distinguish from the rest. They remain riff driven though less punk in their intentions with the "the Hitchhiker" to round out the album. By the end of the song, they have blended this with a Halloween-tinged synth wave that is pretty unique mix of sounds. They perfectly balance creating a sound while writing songs making this album a near perfect success so I will round this up to a 10 an see how it grows on me.