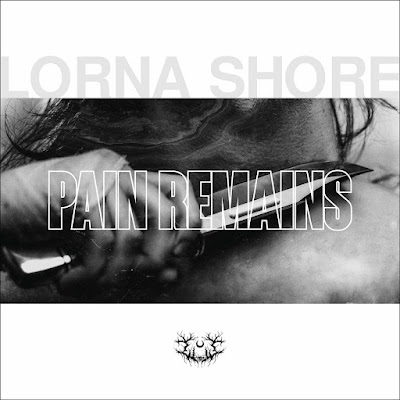 I typically do not share the same musical tastes when it comes to metal as the editors of Metal Sucks. But they were raving about this new Lorna Shore so much that I decided to check it out. I went into this knowing they are a metal core band. The thing with extreme metal bands, which I find myself having to repeat almost every time I review one of them is that fact that it is easy to be impressed by the sheer weight of heaviness when you first hear it if it is done right, but after that sting of the ears wears off, is it just going to be more of the same?  The band has been through a string of vocalists, with Will Ramos, now stepping up to the mic for this full length after the previous growler got cancelled. The opening track as as impressive as most heavy bands are when they hit you with the full intensity of what they do. This band does with machine like precision shifting from riff to riff with a symphonic ambiance around them almost like a metal core Dimmu Borgir.

The metal core and the connotations those kinds of vocals typically have is what wears on me as soon as the second song. The gurgling and pig squealing the main source of my displeasure. It is rarely ever met with the power of a death metal vocalist or the emotion of a black metal one. Any melodic touches this album choose to incorporate helps make the blinding speed fests like "Cursed to Die" do their job more effectively. It might be put together well in the studio in terms of the songs captured, but the feeling of a bleeding soul that makes metal feel like it's rage and darkness and is real, sometimes takes a backseat in order to capture the more mammoth sound at time. By the time we are at "Soulless Existence" the vocals have begun to bore me. The guitar playing is the album's strength, but I do not think it can carry the album on its own. The more deliberate moments work better than when they are more blazing fast. They are good at what they do what they do is just becoming a one trick pony.

The rule here that "cool riffs alone does not a good song make" hits bands like this hard, as the vocals are not contributing a great deal. Instead, everything is running off precise technically refined playing. "Apotheosis" provides a pretty glaring example of this. They like to dress things up as black metal and the vocals are better and the higher pitched gremlin snarl, but I do not get any vibes of menace or darkness from them. It begins to become a case of ...OK I hear what you are doing here, but Dimmu Borgir does this better so why do I need to listen to this. If fact the more gurgled tortured pigs sounds the less of a reason, I have to want to listen to this. When it gets to the "Pain Remains" trilogy which consists of the final three songs, things begin to run together and sound the same as the tightly chug forward in a blur with predictable break downs. If you like guitar solos, they have some impressive ones, mixed into those songs, but that only goes so far. I will round this down to an 8, because they are good at what they do , what they do is not something that resonates with me.