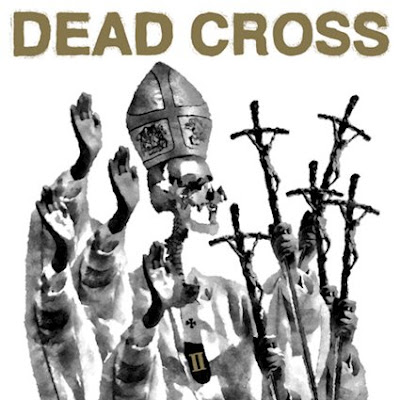 The darkest and heaviest of Mike Patton's many projects. The opening track feels more like "Angel Dust" era Faith No More than more grinding debut from this project. I appreciate the dissonance of what they are doing. Where Patton's singing on 'the Raging Wrath of the Easter Bunny" was more metal in its intentions, that is only a fraction of what is going on here. Justin Pearson from the Locust feels to have more influence on this album when it comes to the less metal more noise punk direction. "Animal Espionage" is a more interesting lyrical and vocal performance. Things remain sonically dense even when being kicked in a more punk direction. It is however the darker atmospheric passages that bring the spastic punk ones into the needed balance.

The rule here is cool riffs alone does not a good song make. That is not to say a cool riff cannot nudge the song in that direction as heard on " Strong and Wrong". In fact, a cool riff is what a song like "Ants and Dragons" might have benefitted from as it would have given some of the chaos an anchor.  Similar could be said when the blast off into the straightforward punk of "Nightclub Canary". When Dave Lombardo is in your band it's fine if you write riffs that sound like Slayer.  This can be heard on "Christian Missile Crisis".  The more thrashing sound works better for me than when they go off into the noisy punk side of things, "Reing of Error" also works off of a similar aggressive vibe. Though this time it is more punk.

They close the album with "Imposter Syndrome"  It has a darker more brooding verse, where Patton has more room to emote the lyrics than what the bulk of the album has given him, then we are back to lashing out with more of a punk vibe on the chorus. In some ways it still reminds me of Faith No More, though many parallels can be drawn to to the sonic zip code of earlier Tomahawk, aside from Patton and Lombardo the guitar and bass are not measuring up to either of his previous bands in terms of chops, so instead they are bringing a somewhat youthful vigor to the expression of discontent the music conveys. I will give this album a 9.5, as it is pretty dark and compelling in it's jarring freak show of sound.