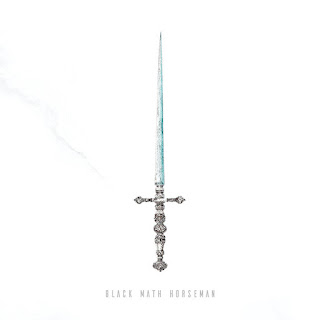 Sera Timms of Ides of Gemini is back with this project that features Chelsea Wolfe's live guitarist Bryan Tulao. Marginally less goth than Ides, they occupy a more metallic space that succeeds in brewing up tension that is dark enough to feel heavy. They occupy a shadowy sonic space that blends elements of many genres. They waste little time building the tension, like clouds gathering over the ocean. Her voice cries out in a melancholy moan. The guitars carry a buzz that is not metal enough to be black metal but is more aggressive than post-rock. In many ways the often-droning tension reminds me of the Swans in how they attack your ears with the pounding they bring.

I enjoy the mood wrought from their tortured instruments, though they tend to use similar colors to paint these songs with. "Boar Domane" lingers a little more in post-rockish atmosphere, before the attack. Her vocals are allowed more space to simmer in. Like Siouxsie her coo provides a juxtaposition to the darkness when at it's less urgent plead. It took a couple listens for this song to full grow on me an distinguish itself from the previous song. They do not attack your ears with the more explosive shift of dynamics until well within the four-minute mark of the song, so more than halfway into it. Then they do not smack you with the guitars like they do on the first song. It is what post-punk sounds like with a metal drummer.

There is a gloomier more plodding feel to "the Bough".  A song that does not work off the same tension of the first two songs and makes it apparent her singing style on this album is less focused on melody and works off of a series of atmospheric chants that accent where the music is hitting. Compared to the other 7-minute songs on this album the three minute closer, feels more like an outro. It is dreamy, though works off similar dynamics just less amplified.  This album works for what it sets out to do, I will give it a 9.