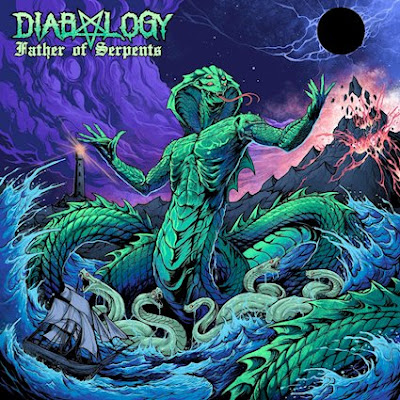 This thrash band is pretty dark and kind splits the difference between being a death metal band and thrash band. The sung vocals the main thing drawing the back to the thrash side. "Writhe" finds the band more fully committing to death metal. It is heavy, but not as well written as the first song. The riffs get a little more hook to them on "the Softest Grave" even though the vocals double down on the death metal grunting. Another thing I like about this band is how, they do not set out to pay tribute to one band, their influences are there, but blended with sounds of their own. Speaking of influences the biggest nod to Testament is the clean guitar passages that often serve as intros to songs.

They try to blend more melodic elements with the cross over punk thrashing, but the y gets mixed results on "Eat My Heart Out". They tend to default to speed rather than find mosh grooves to head bang to. The Megadeth like riffs that is the brief interlude "Spoil": do not develop as they could and serves as an intro to the speed that is being poured on "Blackblood" which owes more to Sepultura. It is a case of defaulting to what is heavier, rather than what might have been a more interesting song, that sounded less like the hundreds of other bands out there doing similar. The plod along similar riffage when it comes to "March to the Sea". Which might be denser.

For every good idea they have on "Ode to Ogtha" they get pre-occupied with trying to be heavier than the song needs them to be. While teenagers and other whose brains are not fully formed, might like this, when weighing it against the caliber of songwriters the legends of the genre have it seems rather foolish. The best song so far is "Chimera" where all the elements fall into play, and they prove themselves capable of writing a song that not only works but is fucking good. They prove they can do it when they focus on it.  The last song works pretty well though not on the level of the previous song. They are onto something it just needs to be polished, but they are still better than most of the newer bands trying this sort of thing, I will give this album an 8.