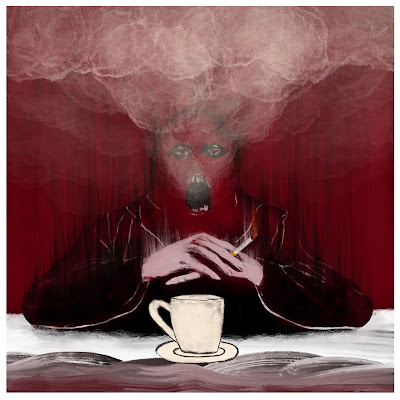 A metal band with an album dedicated to small town diner coffee. Yes, please. After an odd intro, we get into something that owes as much to Tom Waits as it does metal. It carries with it once the song gains momentum the huge sludge lumber with the angular awkwardness of noise rock. Not far removed from what we have heard from this band before, perhaps the grooves might owe a little more to Sabbath this time around and are dressed up like a drunken clown with toy pianos and horns blaring at from its frayed edges. Not the first metal album to flirt with jazz this year. Nor is it the first time this band toyed with this brand of weird, in fact that is why I showed up. After reviewing somewhere around 200 metal albums so far this year I want t something that has little in common with those. What will be interesting here is to see how much of it owes its distinction to metal, by the time this album is said and done .

The second actual song carries  a smoky groove that is possessed by an unhinged darkness. If Clutch got drunk and did different drugs then the results might be similar though this music seem to be made by people with underlying issue that their art serves as a reflection for. The jazz like undertones, undermine the punk DNA needed to think of this as sludge. It is downtrodden, yet not with the kind of longing needed to think of this as doom. It is however progressive. This shows you can have progressive metal that owes not in the slightest to Dream Theater. Now Captain Beefheart might be another story here.  "Grief and a Headhunter's Rage" has a dark pulse that sounds like it could be from a David Lynch film. When it comes together into a more rock oriented song it sounds like Tom Waits jamming with  Tomahawk.

The dark bizarre droning jazz of "Wharf Rats in the Moonlight" goes awry, granted they pull everything back together, but the noise the song devolves into is one of the albums hard to listen to moments as it holds little musical value, though I do like where they end up taking the song. They close the album with the title track. There is some great guitar playing on it , where they show how cleanly they can play actual jazz when they are not fucking around and getting crazy. The vocals build into more of a howl. I will give this album a 9.5, they do prog their own way whether they men to or not.