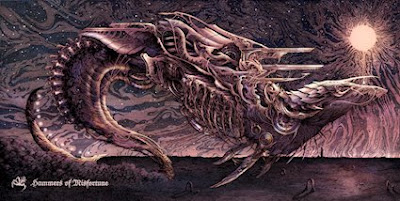 This is a different sound from band which has now become more of a collaborating collective since the leader and guitarist moved out of the Bay area.  Former Vektor members contribute to this endeavor. While the band cites King Crimson as an inspiration it sounds more like King Diamond to me. Due to the thrashing yet progressive manner the songs are woven together, along with the female vocals that hover over the chaos. Not as dark or operatic as King Diamond, the first couple songs have a darker feel than I remember this band digging into previously.

Heavy on the prog pomp and circumstance due to the liberal use of synths, it is also not as theatrical as King Diamond. The song "Don't Follow the Lights" carries a more punk aggression in places as the guitars furiously chug. If you like racing guitars dazzling, you this album has that. Unlike many prog bands the songs are not just bookends for guitar solos or masturbatory excesses. They do layer some odd time signatures, to create sonic chaos that requires a bit of mental untangling.  "Ghost Hearts" juggling guitar dazzle with a haunting mood. The melodic clean chord progression at the beginning of "Outside our Minds" furthers my King Diamon claims. At least when it comes to complex yet, melodic compositions. The palm mutted chugging remains taunt on this one, furthers the more aggressive tendencies. There is some outstanding guitar playing on this album so if you are a metal guitarist this is an album you need to make note of.

The lines between power metal and progressive metal were once blurry, and the song "the Raven's Bell" takes you back to that crossroads. They throw around some syncopated acrobatics, to buck the metal conventions. If we were going to compare them to any classic prog band I would suggest Yes, rather than King Crimson, due to how the synths are handled. "Orbweaver" captures some interesting sounds as the drumming hammers relentlessly without heed to the rest of the band. Jamie Myers deserves recognition for her performance which is spirited and finds her jumping around the songs as she throws her voice all over the place. Mike Scalzi from Slough Feg, also lends his voice in places.

"Overthrower" finds them racing at a breakneck pace. It's up to the guitars to hold everything together on this chaotic thrash explosion. "Aggressive Perfection" holds a steady beat and is almost doomy. This is ironic as it is an obvious wink at Slayer who has a song called "Aggressive Perfector".  It might not be Slayer, but the song is very solid, perhaps even the album's best.  I will give this album a 9, it's  an excellent slab of progressive metal that is one of the year's best stabs at this sort of thing and should not be missed.  This is released on December 2nd.

Overtaker by Hammers Of Misfortune