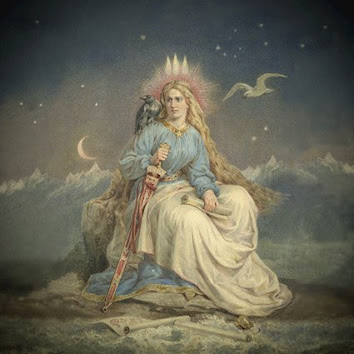 I have given most of their albums a solid listen as this Icelandic band has always been interesting. When the drums hit more of a groove at the end of the first song it does feel more like Kvelertak. Their is a raw agressive quality to what is going on though I am not sure I would call it metal. Rougher around the edges than your average prog rock band, though these guys have certainly progressed throughout their career. If they went back to playing black metal at this point it would be regressive. The second song has more of a groove and more melodically sung vocals . It is moody rock n roll. I can hear what to my ears sounds like an "Obscured By Clouds" era Pink Floyd influence.

"Rokkur" is more laid back in some ways , but more intense in the way the vocals emote. Their attempt at something in the realm of Brit pop occurs on "Her Fall From Grace" which despite it's atmosphere sounds like Shining butchering a cover of a random song by the Verve. Butchering doesn't not mean doing a terrible job here, though the abandon this song is sung with sometimes puts their feelings over being in key in a few places. This apporach however works for what they are doing here. They do throw themselves into a twisted rock version of black metal with "Dionysus". This is not as regressive as I thought it might be showing they are still forward thnking even when they take steps back into their past. The vocals are more shouted than screamed. "Til Moldar" is at the other end of the spectrum and is a lazy floating psychedelic lullaby. The almost more stoner rock song that follows this one is a good balance of the two sides they just showed us the relaxed coud of pot smoke vibe with enough rock balls to drive it.

"Or" has a bluesy feel to it. In some ways it flirts with the blues much like Nick Cave does. Addi's voice is much different than Cave's . Where Nick would give us a dark smoky narrative , Addi emotes with raw abandon. The guitar is really great in this song. I had to give the last song "Ulfar" a few listens to really abosorb it. It has some palm muted drive but falls more on the dynamic side of prog , but with rock groove. I will give this album an 9, it's a very effort for them that pushes forward with their vision keeping their indentity in focus.