Gothtober- the Damned : "the Rockfield Files" 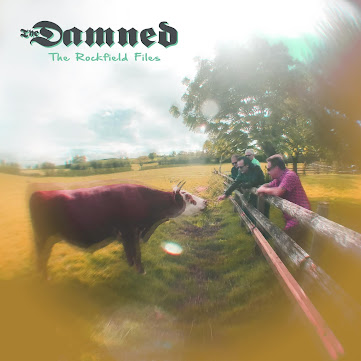 Much like Killing Joke these guys have kept up with the times. Perhaps not not as sharply as Killing Joke. The first track is much more rock n roll. They fake you out making you think it is going to be more goth than it is, then go into something that sounds more like the Beatles. I can deal with Beatles influence even Type o Negative has it. This is a little happier than I want from them. Some of the keyboards soun like if an old hippy garage band got back together to recapture the magic. It is three of the orginal members with a new keyboardist. Pinch is on drums and this is his last recording with the band. . The keyboards are too high the mix is the main problem.

Lyrically the first song is about the perspective of a bee going about his business. It sounds like these golden girls have taken to smoking a ton of  weed. David's voice sounds great. 'the Spider the Fly" he sounds a little like Tom Jones. He might be 63, putting at two years younger than Danzig. His voice sounds ten years younger where Danzig sounds every bit of 65. "Manipulator" falls closer to their more classic sound. It's more rock n roll than what I would call punk. There is more drive on "Spider the Fy" the 60s Las Vegas sound is forgivable as it's just a really well written song despite the Tom Jones tendencies. There is even a riff on here that reminds me of Steppenwolf.

This is one of the forefathers of goth releasing an album in October. Why did they not put out something that leaned into the them more. Are they thinking these hippy anthems. The lyrics to the last song 'Black is the Night" lines up more with what you except from them but this could be a Monkees reunion album. That might be more goth since most of the Monkees are dead. They are great musicians and solid song writers even if it leaves me wondering who passed Captain Sensible the bong. The songs did grow on me and it's a fun easy listen even if it's not exactly as dark as I want it to be so I'll give it a 9.

Email ThisBlogThis!Share to TwitterShare to FacebookShare to Pinterest
Labels: 9, gothtober, spinefarm, the Damned