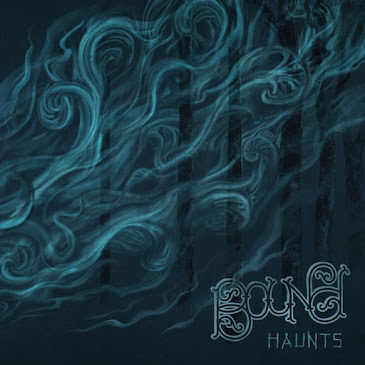 What if Alcest was just dark instead of dipping into black metal. There is a metallic drive to this beautiful album. Shoe gaze can be blended with metal in awakward ways at times. But the song sung vocals work well and are not the typical whisper normally used. Not that there is no whispering . There is some used for effect on the second song that has a more progressive feel rather than just a minimalist drone. With this album with every thing I say there is going to be an exception. They do the unexpected. They threw formula out the window long ago. The female and male vocals are blended in a very androgynous manner. It reminds me of a less fey version of Mew.

When they do drone with chanted melody it still flows well and the vocals have hook to them as shown on "the Divide" . There songs in and I am already thinking how is Nothing going to be able to bring it to compete with these guys. There is a delicate desperation held aloft by the vocals on "the Feild of Stones" . They continue to amaze with the breathtaking wonder they create the deeper into the album you go. Another example of everything time I think the album is going in one direction they throw a curve with a song that is an atmospheric ballad so ethereal it almost takes no shape. It's so subtle you can not let it fade into the background or it disappears. If this was cranked up I am sure the volume would change this aspect. Even increaing it by two changes the effect.

The production is stunning. The vocal are given the right amount of love and effects sitting perfectly in the mix., This guy havea great voice, he shows he can sing, but is not showing off. 'the Lot" finds them tapping into a dynamic not unlike one employed by Katatonia. There is amore post rock sound that moves at a speed reminding me of old U2 on "the Small Things Forgotten" . While I am glad to hear them rip into that rock go solo on 'the Lines" the first half of the song with just coasting on ambiance and more sound than song. " the Known Elsewhere"  is like much of the album subtle and perhaps more so than most of it. The drums pull it together. The  one guitar solo song , keeps this from being a perfect album, but a 9.5 puts them head and shoulders over their peers. This is still an amazing album that shoud not be missed if you are into shoegaze!