Gothtober - Looking Back in Anger at The Door's "Morrison Hotel " 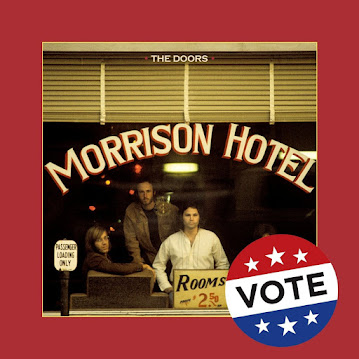 I know some punk rockers that are not going to be happy but here it is ...the Doors were the first goth band. In 1967 a music critic used the term to describe the Doors  In 67 that would have refferred to their 'Strange Days" album which is a shade darker than this one , but it's the 50th anniversary of this album so it's the one we are going to take a look at. The opener "Road House Blues" the is best drinking song but the song that follows 'Waiting For the Sun" offers some darker tones that certainly could have influenced the likes of the Cure and Bauhaus. "You Make Me Real' is a little too straight up rock n roll and up beat for my tastes , but given when it was released it makes sense.  "Peace Frog" is a better song even if it is on the more peppy hippy side. Though his melody on the chorus is moodier.

"Blue Sunday" finds us back in a garden of sounds that paved the wave for goth with the more introspective take on psychedelics.  “Ship of Fools” finds them back in the jazzy circus music they dance around with. Like a less aggressive version of “LA Woman” . On this album you really get a taste of how great a guitarist Robby Krieger is. "Land Ho" is a song I always for about. It almost feels like you should square dance to it. The balance of a darker undertones against their blues base it well balanced on "the Spy" . "Queen of the Highway" is along similar lines though with a more slinky groove and better lyrics. For all his acclaim as a poet I think Morrison is often over rated as a lyricist. Granted when he really nails it he really nails .

"Indian Summer" supports my claims of forbearing the goth sound. It is one of times they came claoser to a ballad. Like other great bands from this time like Pink Floyd or Led Zeppelin, the Doors did not do just one thing. You can hear that on this song. "Maggie M'Gill" finds them back in the more drunken blues shuffle. I think at this point they were doing less LSD and drinking more. These songs lean more toward a bar room feel. I will give this album a 9.5, not their best album, as the booziness makes it more straight forward than what I like the most from them. But Robbie's playing takes the spotlight here and makes this not onlyu well worth the listen but better than most bands who are not the Doors.