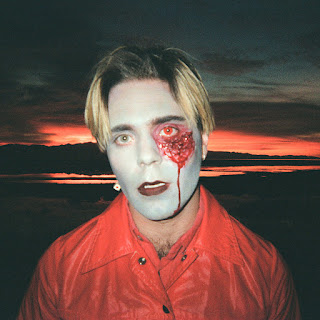 I am not sure why this band's name comes up in dicussions of new goth bands online. They do havea Communards / Roxy Music things going on thanks to the angrogynous vocals. Nothing is dark about them, In fact they are on the poppier side of dream pop. This is fine with me pop does not have to be a bad word. Thje second song however is not as sleek or hooky as the first. The pace picks up a little on "Complainer". They nail the 80s sound and this guy has a great voice, but they could get more focused on the song writing department. "Nites Like This " is more like a Roxy Music ballad, which compared to the previous song is a step in the right direction.

The album's best song is the ode to the chronic masturbator that is " Sweet Candy" . The lyrics and the melodies are head and shoulders above the rest of the album. "Shatter" is a closer second as the chanted chorus grows on you with each listen."Happy To Be Bad" is also pretty decent , but perhaps not at the level of this album's strongest sounds. I can not imagine being a beer drinking straight man who is into this album though I can imagine beer drinking straight men being into Roxy Music they are just also really into cocaine. Despite my bear like exterior I had an androgynous spell during my goth years, but this album is so limp in the wrist the level of fairy dust generated here pushes that to the make and I liked Anthony and the Johnsons.

I will give this album an 8.5 . There are some fantastic songs on here, but overall the album is not the most focused. The drums could step it up and give this more of a back hone. I think it is produced exactly how they wanted it. Imagine Hedwig and the Angry Inch but limp and you are in the direction of where this album not only wants to go but gets there.