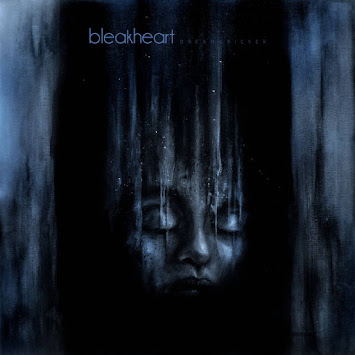 Formed by JP from In the Company of Serpents, this project also includes singer Kelly Shilling from Dreadnaught. I could have saved this for November's month long tribute to doom, but despite it's dreaery pace it falls in the middle ground of doom gaze with the emphasis on sonic shadows. The first song the sund really grabs you. The cleaner guitar tones . The equally brooding and ethereal vocals , which certainly help it seal the deal when it comes to appealling to goth culture, in a way not unlike that of Chelsea Wolfe. Though Wolfe does what is being done here with a more emotional darkness.Kelly's vocals are more languid and detached.

After the impressive sound summoned with the first song, I have to ask on the second 'this is cool but can you write a song?" . There is not a clear cut answer to this until "the Visitor" . Where the second song droned in a manner almost too much like the first song, "the Visitor" offers a greater range of dynamics. It builds up and distortion kicks in, so there is more punch. I do not need this to be heavy, if it goes there that is just an added bonus. "the Dead Moon" kinda falls back into the comfort of the drone. They do kick in a little on the climax of the song, but moving at almost a funeral doom pace , the drag feels like the first two songs with the cool piano embellishments giving it some manner of identity.

If the pacing of songs that are 7 minutes can drag then I am a little worried going into the almost 12 minute title track. Four minutes in it picks up into more of a doomy lumber. It is one of the album's more metallic moment. The vocals do not form melodies that really draw you in instead servings at atmospheric layers . Sure she is singing lyrics . But they drift.Aside from being more metallic this song does not offfering a great deal we have not already hear in the first four songs. It is stil pleasing to the ears. Despite needing to expand the dynamic range and putting a little more hook in the melodies , this is well done and I will give it an 8.5 .

Email ThisBlogThis!Share to TwitterShare to FacebookShare to Pinterest
Labels: 8.5, Bleakheart, doomgaze, In the Company of Serpents