Lykantropi : " Tales to Be Told" 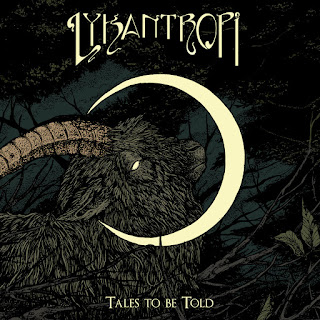 This witchy stoner rock has songs about vampires on it, but sonically they are not dark enough to be fit for Gothtober. The vibe is more hippy. They are more leaning toward the shadows than your average stoner rock band. These Swedes are more influenced by Coven than Black Sabbath or Thin Lizzy. I really like My Shaolin's voice is moody and mellow at the same time. They are a little more progressive in the manner their sounds are layered. The flute does lend a more proggy texture, but they are very song focused and less sprawling and jammy than the Devil's Blood. That is not to say they are totally devoid of any jammy qualities. Some of these come in their mellower moments.

Production wise this album sounds great., It is not until the fourth song that male vocals take the lead. He has a very laid back baritone. Almost in the vein of David Gilmore. They throw jazzy intervals into the vocal melodies rather than sticking to rock pentatonics. Blues is not the back bone of what they are doing. It comes closer to folk at times. We have got flute solos going down without things going in a Jethro Tull direction. When it comes to guitar solos they have got those done to. The are very fluid. The first hint of blues is on "Spell on Me".  But the vocals owe more to folk. There are hints in the guitar, which are darker than the first four songs.

There is more of a rock feel to "Axis of Margaret" . Males vocals return for "Life On Hold". His croon is silkier here, The last song is trippier , but not as focused. At the end of the day this feels more prog than not, and that is perfectly fine with me. I will round this one up to a 9.5 as it is so easy to listen to and I can hear it growing on me.