Gothtober - Altar De Fey : "And May Love Conquer All" 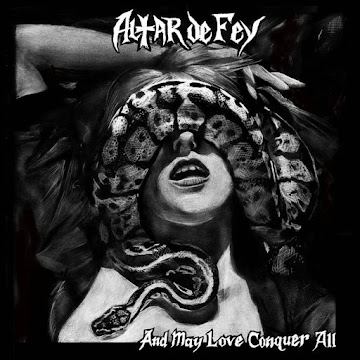 g This freed them up to worry about writing songs instead. Yes the vocals are similar to Rozz Williams. I will take it after all Rozz is dead , and Valor doesn't try to go at it like this. The bass line is the classic goth creep. The guitar parts are what sets them apart as they are more like early 80s Cure. The vocals are not just pointless ranting, they play an integral part of the song. We have Vincent Price samples going into the title track. I like how the vocals emote and how dark the bass line is. The chorus is hooky . What more could you want. Maybe four more songs.

The second half of the album gets more punk. Of the two songs I like the last one best. It is more plodding in it's groove but more interesting sonically . He hear the singer's lower register for a few moments on this one. He also can ger more aggressive. This proves a shitty singer can make or break you, just like a great one will further elevate your sound. It is the latter here. "I Want" opened up with more of a throb, but is more straight forward in it's manic march.  It is not a fast song, just more pounding in it's pulse. The vocals accent what is going on there perfectly. Both of these songs connected more on the second listen . Might be more of a my fault as a listener.

This is one of the more perfect Halloween albums I have come acorss this month. I will give it a 9.5, I hope they do not fuck around and put out an entire album soon enough. The vinyl for this one is delayed, so that would also mean further recording is more than likely delayed as well, It is a rough year for bands. It looks like these guys are keeping this going without the help of a label so it is even harder for these guys / Go preorder your vinyl now.