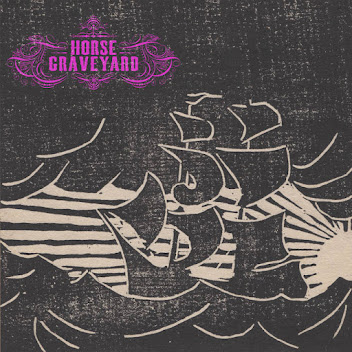 This might have been recorded 15 years ago but it is just now seeing the light of the day. The timing could not be better as all kinds of gothy folk and blue grass have been coming out in the past few years. This does owe a great deal to Nick Cave. The violin adds that sense of elegance to what might sound like rail road punks trying to play country. The second song picks up where the first left off. The male vocals are a little on the rough side. I have not heard electric guitar yet. there is some angry strumming going on though. The drumming is also better than what these kinds of projects normally employ. So it that sense there is a bit of a connection to Murder By Death.

The first electric guitar surfaces on "Imogene" . It's more up beat . The femal violinist sings more on this one. She has a little better voice. She starts off kind of purring more through the song until it builds into more of a punk energy.  'the Work Song" felt like it was connected to the previous song as she sings on this as welll. There is a little more of a post punk feel to this one. It works of a single pulse. A little more tense but in a rock n roll way. Her vocals have a little more of a chanted quality, though is very punk influenced. 'Goathead Man" feels like a more rowdy drunken version of "Sinner Man". This drummer is fucking bad ass, and helps with their over all sound. I think without him they would feel more like country.

" the End Has Come" is more straight forward. It reminds me of a burlier version of the Violent Femmes" . I do not think aside from the punk energy of it this song really doesn't stack up as well against the other songs. It is not bad , it just doesn't feel as well crafted. I qwill give this album an 8.5 , it would have been coiol to have heard where they were going from here.