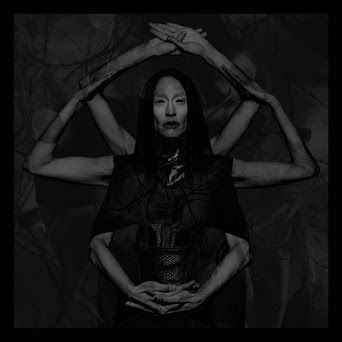 It has been awhile since I checked this project out. The production and the range of what they do sonically has greatly improved. The second song is more dark wave. The manic vibrato of her voice is likea possessed goat. She can sing in a lower more chanted voice as well, it works best when the two are traded off as a dynamic as I am not sure I could take an entire album of jsut the goat vocal. She reins the vibrato into more of a Rozz Williams level on "Dry as Dust". The song has a snake like bass line and creepy enough groove to really win me over. 'Our Souls Take" is more of an atmospheric interlude than a song. They take some of that mood and carry it over into "Within". It has enough groove and purpose with the vocals to make it a song.

'The Loss" is more droning . I think for the kind of shadowy hypnosis they are trying to induce here , this certainly works. As far a songs that hook you in and find you thinking " Now this is the song I really need to hear right now" is something I can not hear someone saying unless they are on a ton of drugs. I do think this album could be one that you leave playing in the background. "Industrial Waste' invokes a sound that brings old Swans to mind. A very early industrial pound to it. It works of a one dimensional; throb ,but that is the whole point of this sound.,

Things get more melodic on "Siren Calls". It makes me think of what might happen if Diamanda Galas jammed with Switchblade Symphony. I like that it opens new doors of sound and takes the darkness of this album in another direction, not painting in the same shade of black. A more driving industrial pulse pushes the last song ahead. This works as it is great to hear the dynamic range of this album. I will round this up to a 9.5 as it will likely grow on me. If you like your goth tinged with industrial this is for you.