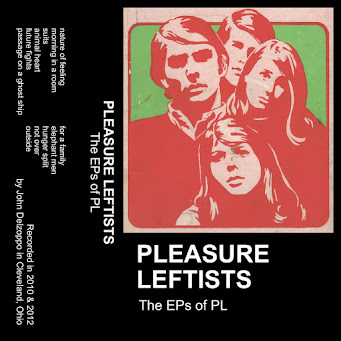 The bands earlier eps have all been released as one album. They are from 2011 and 2013, the sound quality even of these remastered version is a little muddy until we get to the third song 'Suits". You can tell she is fine tuning her voice and sometimes out right trying to find it. The ycome close to they are on "Suits" . She is kinda moaning her way through the songs a sharp contrast to the emlodies of their last album. If you like more of their punk side then this will appeal to you more .'Animal Heart" has more drive than focus, but once again these are the early days. I am weighing it against my expectations so therei sa little disconnect.

More frantic punk erupts on "Future Fights". Once we get to "Passage on a Ghost Ship" I am having to just power through .I mena of all the post punk revival bands these guys are one of my favorite, so it is clear they have grown a great deal in the past decade to get where they are now. "For a Family' works off a familar tension, but her vocals are listless and seem like more of an after thought than the focal part of their songs she has become. On bigger speakers you can hear more of the remastering . I think it might be mid way into these songs where it farst forwards two fears to the second ep, as the production is beter and you can make out more of the songs.You can also hear improvements in her voice and choice of phrashing.

The bass surfaces more on " Elephant Men". They lock into the kind of tension we find working for them today here.. This is the best song yet amid these other wise rough ideas they were polishing.This second ep sounds less likea demo and more like an actual album. There is more of a punky punch to it. "Hunger Split" remins me of early 80s REM, in the way the guitar jangles. The guitar playing shows great improvement there is a more Cure like tone to "Not Over".  It ends with the tense drone of "Outside" which is more sound than song, but better than anything from te first demo. Tthanks to the second demo which is quite good I will give this an 8. Worth a listen if you are a fan of the band.