Of Feather and Bone : " Sulfuric Disintegration" 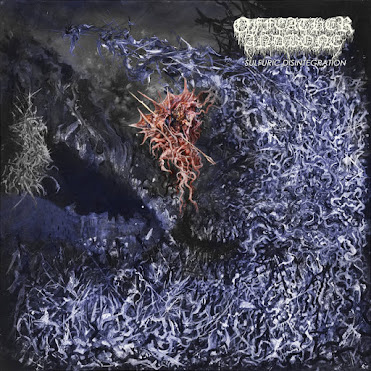 In the first minute of this album there is no question if this album is going to be heavy. Obviously If you heard their previous release then you already knew what you were in for. At this point we are three albums in where if you think of it compared to other bands' that would put them where Morbid Angel was in their career for "Covenant". Are we going to here that much growth? Doubtful though, this album benefits from better production value. The first song is blistering fast. Speed only gets you so far in my book. I prefer it more with thrash and black metal. When death metal doesn't have a groove the massive sound of it feels like it is tripping over it's own to feet. There is more Morbid Angel influence in the guitar this time around so that earns them more points than what I remember from the last album.
The second song blasts along almost just like the first . The dive bomb solo is different, There are accents here and there that stand out, but nothing that makes me say. "That was a good song I want to listen to that again." Instead there are a bunch of riffs thrown at me with the intent of punishing my ears. I am a sadist not a masochist. The third song is no different than the second except for a riff here or there. The cool riffs alone does not a good song make rule here really hits bands like this hard. There is a little more to grab ontpo with "Consecrated and Consumed" but not by a huge margin since it fast so fast it is hard to focus on what is going on in order to form a real connection with the song.
The last song does get more deliberate mid way into it. This is a little too late as they have just numbed my ears out by this never ending pounding that loses it's effectiveness. It ceases to be heavy as there is no contrast. How do you know loud if you do not know quiet?  I will round this one down to a 5.5. At first I appreciate the density, then I have to ask but can you write a fucking song, they just blast beat around the bush and never answer me.
Posted by Wilcifer at 7:28 PM

Email ThisBlogThis!Share to TwitterShare to FacebookShare to Pinterest
Labels: 5.5, death metal, Of Feather and Bone