Six Feet Under : "Nightmares of the Decomposed" 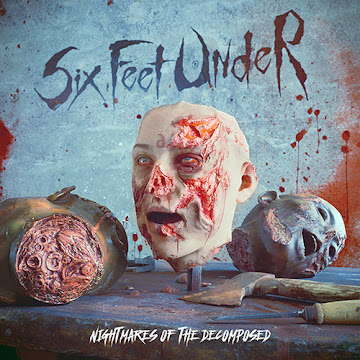 Yeah I know I am in the middle of my goth month but this album is a big enough deal to break away from our regularlly scheduled programming. Jack Owen from his old band is on board . The guitars are not the problem with this album it's Barne's vocals. He is known for a sub bassy gurgle. That is not what we are getting. It's more mid range. It becomes more tolerable on "Zodiac" the second song. The pig squeal type thing that occurs on "The Rotting" is silly and breaks the mood, leaving the guitar to do all the heavy lifting. The bass player is pretty good and the drummer is playing death metal so that alone says something. Barnes is the weak link. The opposite of the impact he made in Cannibal Corpse.

"Death Will Follow" works off the kind of groove it needs to in order to compensate for the bafflingly bad vocal preformance.  At 52 I am not sure how his voice could be struggling with what was a fairly simple but effective approach to growling. I mean this makes me glad that Corpsegrinder has hung tough in Cannibal Corpse after all these years as he sound much better than Barnes does here."Migraine" works better all the way around, though the lyrics do not make sense. There is more of a Slayer vibe to " the Noose". This choked pig like vocal is just as silly as ever here. The groove of the song is cool, but not a great of substance contained with in.

I like the bass taking center stage on "the Blood of Zorr" . It gives the guitar more room to breath and dynamics to work with. It might be the first song I was totally down with on the first listen. There is more of a thrash feel to " Self Imposed Death" . I am not sure how he went from one of the best death metal vocalists to this. It is like he gurgling as he tries to talk his way through the songs.  "Dead Girls Don't Scream" is pretty straight forward and his vocals work a little better though no where near what they were. " Drink Blood Get High " is a little catchier, though also very meat and potatoes death metal with a groove. The song writing slips on " Labyrinth of Insanity" ,  The "scream" or rather sound that opens "Without you Life" sound like Cartman pretending to be a goat. The riff when it slows down is cool, but remember the rule here is 'cool riffs alone does not a good song make"  I have to round this one down to a 7.5, as it is one of the worst vocal performances I have heard.