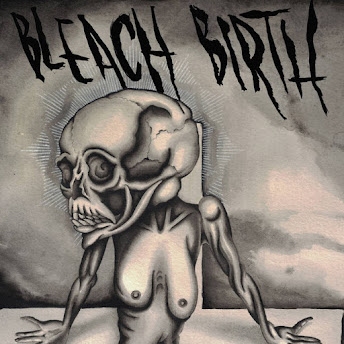 More punk than death rock, though these guys make it no secret they are influenced by things that go bump in the night. But at this point they are more likea band that used to flirt with death rock as most of what goes down here is punk. The vocals are more snarled. It alsmost sounds more like black n roll. The death rock influence lies in the guitar most of the time, but the bass player also knows what is up.They get more manic frantic on the second song. The vocals are really their weak link . These little dittys might sound more like songs with actually singing. They begin digging into some weirdness on the third song to break up some of the punk monotany . With the little sonic color they do add it brings the other punk side more to life.

'Track Four" finds the bass player proving themself and a more post punk sound creeping in. The guitar has more of a rock n roll drive. The vocals have more purpose and you can under stand most of the lyrics. "Killer In the House' is almost straight up punk accept some dark dissonance in the guitar. Though the begin to get spooky by the end of the song with ghostly laughter swirling around. The black n roll comment I made earlier could apply to " Hoarse Hearse" as it is more metallic. The song after this is probaly the most death rock sounding song on the album, though the vocals barking as they do kind of off set it for me,

The last song is pretty much balls out punk. I mean I do remember when these guys were more death rock , sounds like they are regressing as punk is a step backwards from where they were at. It is a rawer sound on this album. If you think of these guys as a punk band then, you are going to get more of what you want from them. I will give this a 7.5, not really my thing , but they are good at what they do sound wise, I think the song writing is a step backward for them .