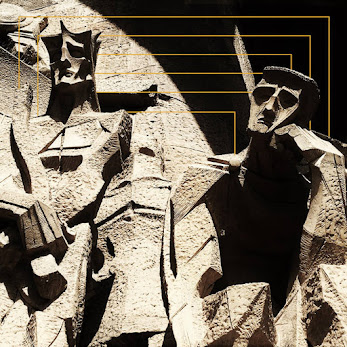 Often post-punk is just Joy Division influenced indie rock and not dark enough for me. That is not the problem here. The first song is darker and more melodic. The vocals are more sung that the starker more Ian Curtis narrative that follows on the next two song that are sonically simlar, the second song being taunter in tension that the more deliberate "Leonidas" . I like where the vocals end up approaching the second half of the song with a more sung waver in his baritone. The drumming is not as strong on "the Hand on the Knife" which defaults into what you would typically expect from post punk these days.

"Backwards" is more dynamic. The song benefits from the more melodic turn which allow the mood to grow more depressive. The band benefits from having vocals that are not just a monotone narration, but uses melodies that are not afraid to waver from the drone of the guitar. They are really good at blending a post punk starkness with melody. The song "GRIN" is a good example of this. It is fitting that "October" has a more gothy tone to it. Not fully Bauhaus, but darker and more elegant. This proves they are in fact influenced by goth and not just post punk.

"Hymn" continues to lean on the dark side , but it is not as an impressive display of song writing. A lonely plodding bass line opens the last song. The vocals are more plainitve , reminding me a little of Rope Sect. I will give this album an 8. It's pretty solid and there are some songs that really shine. The production is bare bones, but has a great deal of clarity in the mix.