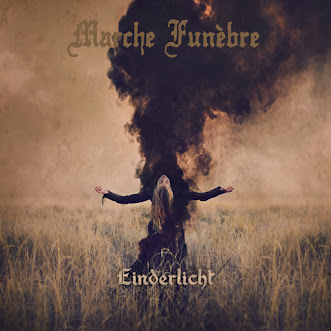 At their core they are a death metal band as they are stacatto and aggressive. The vocals are low growls when they are growled by on the first song there is some interplay with sung vocals . Overall everything that goes down in the first song is what I want from metal. It's heavy but catchy and melodic. They do not over due the guitar harmonies as many European death metal bands do. It more likea more ballsy version of Amorphis. The catch is I thought the first two songs was just the first song. I an not sure what I thought they were doing in those 16 minutes but I seem to have liked it though. It does speak to the fact that they have a uniformity to their sound. The sung vocals are more dramatic on "When All is Said".  It slows with more melancholy so I get why some might want to call this death doom, but it is much more in the death metal side of that equation.

"The Maelstorm Mute" finds the sung vocal feeling more like Candlemass to me. With this song the switch things up in a way this album was being to need. I am not saying I was bored up until this point but too many metal bands these days just hit you with the same thing. I think the contrast makes " Deformed" feel heavier . As it is the song works really , while the riffs are heavy and in your face they are crafted with hooks that stick in your head. The title track reminds me a little of Agalloch at first then it smoothes out into what you leanr to expect from these guys. Not as strong as the previous to songs, but it's a longer and more winding song, so requires a different brand of intensity.

I was on the fence in regards to if this album is a death metal album due to the clean singing. I think Opeth's "Deliverence" album is a death metal album, so that balance of melody against intensity exists here though this is a less progressive album than "Deliverence". It is an excellent album that I think will grow on me so I am going to go ahead and round it up to a 9.5. If you like melodic death metal of the European variety then you should find plenty to love here.